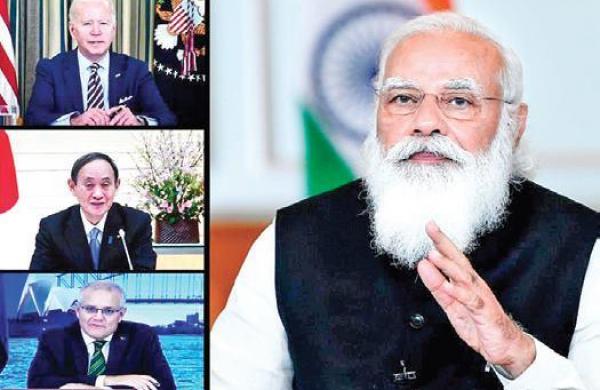 Express News Service
NEW DELHI:  Prime Minister Narendra Modi on Friday participated in the first-ever Quad Summit meet virtually where a combined initiative to boost India’s vaccine manufacturing capacity was announced even as sources said the stand-off against China on the LAC, too, came up for discussion.

Dwelling on the vaccine initiative, Foreign Secretary Harsh Vardhan Shringla said it will leverage strengths from each of the member countries to achieve the target of manufacturing one billion doses by the end of next year. “Japan and the US will finance the initiative while Australia will provide logistical support to the programme,” Shringla said.

A joint statement titled Spirit of the Quad released after the summit said the four countries will expand safe, affordable, and effective vaccine production and equitable access to hasten economic recovery and benefit global health. “We recognise that none of us can be safe as long as the pandemic continues to spread… We will collaborate to strengthen equitable vaccine access for the Indo- Pacific, with close coordinat i on wi th multi lateral organizations including the WHO and COVAX,” it added.

A joint working group has been formed to oversee the implementation of the vaccine programme. Similarly, Shringla said, two more joint working groups have been constituted to work on other important agenda of the Quad like technology and climate change. Earlier, addressing the Summit virtually, Modi said the grouping was a positive extension of the country’s ancient philosophy of Vasudhaiva Kutumbakam, which regards the world as one family.

The meeting was also attended by US President Joe Biden, Australian PM Scott Morrison and his Japanese counterpart Yoshihide Suga. The Quad grouping, comprising India, Australia, Japan and the US, is seen as a platform to counter the Chinese aggression in the region, especially the South China Sea. “Today’s summit meeting shows that Quad has come of age.

It will now remain an important pillar of stability in the region,” Modi said. Announcing the vaccine programme, Biden said, “We are launching a new ambitious joint partnership that is going to boost vaccine manufacturing for the global benefit and will boost vaccination programmes in the Indo-Pacific region.

Stand-off at LACThe stand-off in Eastern Ladakh along the Line of Actual Control wasdiscussed during the Quad Summit and members had sympathetic views, sources said

Inclusive Indo-Pacific“We are united by… our commitment to a free, open and inclusive Indo- Pacific. Our agenda today covering areas like vaccines, climate change and emerging technologies makes the Quad a force for global good,” Modi said