Pushkar Singh Dhami: Played like MS Dhoni but gave away own wicket cheaply 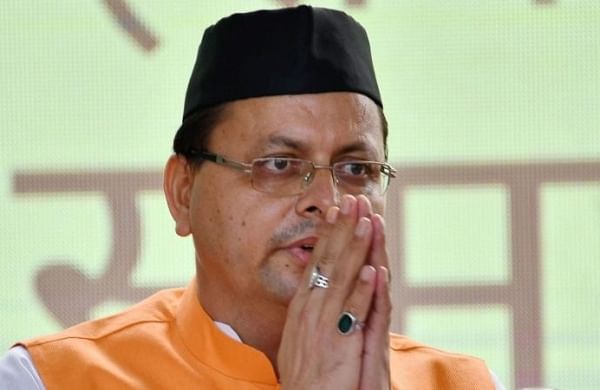 Dhami, he said, is a “good finisher”.

Dhami was plucked out of obscurity by the Bharatiya Janata Party leadership last July to be made the Uttarakhand chief minister, with just months to go before the party faced the assembly elections.

He also happened to be is party’s second CM replacement in 2021  earlier Trivendra Singh Rawat was made to make way for Tirath Singh Rawat.

Dhami seems to have justified the BJP’s choice.

The ruling party appears set to form the government in Uttarakhand again, the first time in the state’s 21-year history that a party will come to power for a second term in a row.

But in his own Khatima constituency, Dhami lost by a margin of about 6,500 votes.

At 45, he was the state’s youngest chief minister when he took over in July.

The state was then grappling with a series of problems and with elections just round the corner and Dhami ran against the clock.

The state’s economy was battered by Covid, the Char Dham priests were agitating against a new regulatory board, and a massive Covid testing scam had grabbed headlines.

Like other BJP chief ministers, Dhami styled himself as the one who executed Prime Minister Narendra Modi’s grand vision for the state’s development through a double-engine government.

Dhami is often regarded as protégé of Maharashtra Governor and former Uttarakhand chief minister Bhagat Singh Koshyari, whom he served as an Officer on Special Duty (OSD) and an adviser.

He began his political career in 1990 with the Akhil Bharatiya Vidyarthi Parishad, the student wing of the Bharatiya Janata Party.

He was the state president of the Bharatiya Janata Yuva Morcha twice and campaigned for reservation of jobs in industries for the local youth.

Dhami’s father retired as a subedar in Army.

He was born in Pithoragarh’s Tundi village, after the family shifted there from its ancestral village Harkhola.

When he was in class 5, they moved to Khatima, which was to become Dhami’s karmabhoomi’.

He won from there twice.

Dhami graduated from Lucknow University in Human Resource Management & Industrial Relations, and also has a degree in law.

While making the cricketing analogy Rajnath Singh reportedly said Dhami was working relentlessly as CM and needed to play a test match.

But it is yet to be seen if the party will continue with him at the crease after giving away his own wicket cheaply.