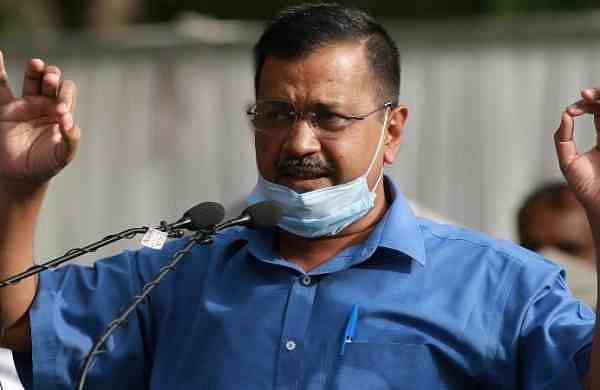 CHANDIGARH:  The entire Jalandhar city was painted in the color of patriotism on Wednesday with a tricolour in hands and reverberating slogans of “Bharat Mata Ki Jai”.

This was the view of the Tiranga Yatra (Tricolor procession) led by AAP’s National Convener and Delhi Chief Minister Arvind Kejriwal who is on a two-day visit to Punjab.

Kejriwal said, “It’s a wonderful tricolor procession. The people of Jalandhar showered us with lots of love. We want to make Punjab prosperous. We want to take the state forward by establishing peace and brotherhood here.”

He added, “India’s biggest Sports University will be built in Jalandhar when AAP is formed in Punjab in 2022.’’ Kejriwal said the people of Doaba, a stronghold of NRIs, have to go to Delhi, Chandigarh and Amritsar to catch flights.

“They won’t have to travel far to catch flights after the formation of the AAP government. ‘Aap Ki Sarkar’ will build an international airport in Jalandhar.”

Two children, who came in the march, gave their piggy bank money to Kejriwal as their contribution to the party fund.

Meanwhile, former Punjab chief minister Amarinder Singh on Wednesday targeted chief minister Charanjit Singh Channi over the alleged posting of the police officers in the state, asking why he did not order a probe into the issue.

Singh took a dig at Channi’s “alertness and promptness” in ordering a probe into the circumstances leading to the leaking of selective pages of a letter written by a senior police officer to the Director General of Police but hesitated to do the same over the issue of posting of police officers.

A few days ago, a Punjab minister had reportedly leveled allegations of acceptance of money in lieu of posting of district police chiefs.

The Akali Dal had then also demanded a probe into the accusations.

Amarinder Singh said he understood the “despair and frustration” of “this government” as it was getting “exposed with every passing day with every fake promise and announcement it made”.

“You would always ask for just two days of authority to put everyone behind the bars”, he said.

“What happened now, as you are already there for about three months and have not arrested a single person so far,” he added, apparently referring to Channi.

Channi on Tuesday had ordered registration of an FIR in connection with the leak of a letter written by a senior police officer who cited some legal hurdles in conducting reinvestigation in some drug cases against a senior Akali leader.

The Shiromani Akali Dal (SAD) requested the Election Commission on Wednesday to review the postings and transfers of Senior Superintendents of Police (SSPs) and other officers allegedly done with an “ulterior motive” of influencing the upcoming Punjab assembly polls.

In a representation to the full bench of the Election Commission of India (ECI) here, a two-member SAD delegation of Maheshinder Singh Grewal and Daljit Singh Cheema also urged the panel to appoint a regular director general of police on merit in the state to boost confidence of the people and also deploy central forces at polling booths, according to a party release.

It called for videography at all polling booths and requested the EC to issue directions to the state government to stop “misleading and bogus advertisements” at the cost of taxpayers’ money.

The SAD representation said the manner in which transfers were allegedly being done on “monetary concerns”, as reported by a section of the media, had put a big question mark on the conduct of the forthcoming assembly elections in a free and fair manner.

It said it was strange that in the last three months, the government could not appoint a regular DGP and had purposely appointed an acting DGP to keep senior officers on “tenterhooks and coerce” them into implementing its “political agenda of vendetta” against the SAD and its top leadership.

The ECI full bench arrived here on Wednesday on a two-day visit to take stock of the preparations for the Punjab assembly polls that are due early next year.

On the first day of the visit, Chief Election Commissioner Sushil Chandra and Election Commissioners Rajiv Kumar and Anup Chandra Pandey held separate meetings with political representatives and officials of police and paramilitary forces, according to an official statement.