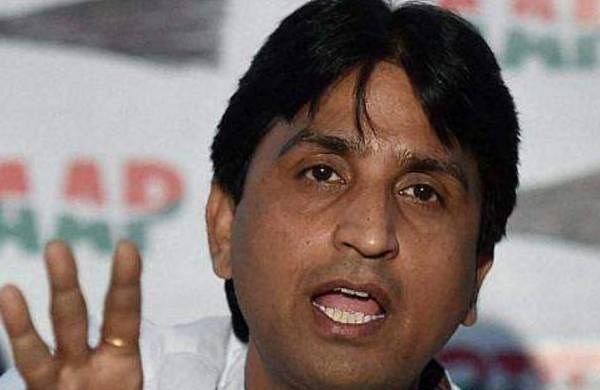 Both leaders have been summoned for questioning on April 26. The case was lodged against Vishwas in Rupnagar town’s Sadar police station on April 12. The former AAP leader ahead of the Assembly elections had accused Kejriwal of supporting separatists.

Vishwas shared information in a tweet about a police team visiting his Ghaziabad home on Wednesday morning and warned that AAP chief Kejriwal will one day “betray” Punjab. “The Punjab Police visited in the morning. I am forewarning @BhagwantMann, whom I had inducted into the party, that the person sitting in Delhi, who is being allowed to play with the power of people, will one day betray you and Punjab,” said Vishwas in a Hindi tweet.

The move drew the ire of the Opposition in Punjab, which accused the Bhagwant Mann-led government of acting like AAP leader Arvind Kejriwal’s “puppet” and “using the force to silence critics”. Rupanagar SSP Sandeep Garg said over the phone,”We have registered a case under relevant provisions of the law against Kumar Vishwas.”

In a notice, Vishwas has also been asked to produce evidence to support his allegations. A complainant, stated to be an AAP supporter, in a complaint to police had said Vishwas gave “inflammatory statements” against Kejriwal on news channels and social media platforms, alleging links with separatist elements.

The complainant claimed that when he was roaming in villages along with AAP supporters for the redress of people’s grievances, some unknown masked men stopped them and called them Khalistani.

“Similar incidents have been regularly occurring. All this started after Kumar Vishwas gave inflammatory statements against AAP convener Arvind Kejriwal on news channels/ social media platforms alleging AAP links with separatist elements. As a result of these statements and videos, the peaceful atmosphere of the state of Punjab is likely to be disturbed,” the official release issued by the Rupnagar police quoting the complainant said.

“As part of the investigation, a notice has been served upon Kumar Vishwas to produce whatever evidence he has to support his allegations,” said police in the statement.

The FIR has been registered under various Sections, including 153-A (promoting enmity between different groups on grounds of religion, race, place etc), 505 (whoever makes, publishes or circulates any statement, rumour or report), 120-B (criminal conspiracy) of the IPC and 125 of the Representation of People Act.

When contacted, Rupnagar SP HS Atwal said Lamba has been summoned for questioning in the case while pointing out that she had supported Vishwas’s “inflammatory statements” against Kejriwal.

She has been asked on what basis she supported the Vishwas’s claims, he said. Punjab Congress Legislature Party leader Partap Singh Bajwa condemned the police action and said AAP came to power on the promise of bringing a change but it seems it has started taking revenge.

Bajwa said it appeared to be an indirect message to political opponents to either fall in line or be ready to face the same fate. Former Congress MLA Navjot Sidhu also slammed the Mann-led government over the action against Kumar Vishwas.

Shiromani Akali Dal chief Sukhbir Singh Badal termed the police action against Vishwas as violation of the constitution. AAP spokesperson Malvinder Singh Kang said that he was surprised to see that the Congress and BJP leaders have come to the defence of Vishwas.

He said they should have faith in the Punjab Police and let it do its job. The Punjab Police had earlier booked Delhi BJP leaders Tajinder Pal Singh Bagga and Naveen Kumar Jindal.

The state police had booked Bagga, who is a BJP spokesperson and has been attacking Delhi CM Arvind Kejriwal over the movie “The Kashmir Files”, on charges of making provocative statements, promoting enmity and criminal intimidation.

Police had registered the case against Jindal for allegedly sharing on his Twitter handle a “doctored video clip” of a media interview of Kejriwal.