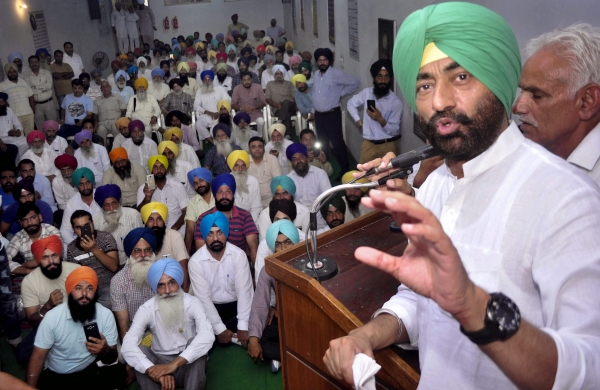 By PTI
CHANDIGARH: The Punjab Assembly on Wednesday passed a resolution condemning the ED raid on rebel AAP member Sukhpal Singh Khaira, dubbing it as “unconstitutional and unwarranted”.

The resolution was brought by Parliamentary Affairs Minister Brahm Mohindra in the Budget session here.

Mohindra said the resolution was brought with the permission of Chief Minister Amarinder Singh from the state government side.

“This house expresses concern on the current role of the central agencies such as CBI, ED, NIA etc which have been set up to ensure transparency in public life.

“Unfortunately, there have been apparent instances wherein these agencies have been used to harass innocent people including farmers, artists and politically elected representatives and even some government officials,” said Mohindra, reading the resolution passed by the House.

Referring to Khaira’s absence from the Punjab assembly, Khaira said the House takes note of “an unwarranted and unconstitutional interference by the ED and “condemns this interference unanimously”.

“This house strongly condemns such unwarranted and unconstitutional interference by the central agency and urges upon the government of India to refrain from infringing upon the rights of the elected representatives of the people by subverting the due process of law and uphold the tenets of the democratic set up in the country,” he said.

The two BJP MLAs were not in the House at the time of the voting on the resolution.

Even the Akali Dal and AAP members were not present in the House as they had walked out of it during the passage of the resolution.

Khaira who was present in the House in the budget session termed the raid conducted by the Enforcement Directorate as a “well-planned vilification and character assassination campaign” against him by the Centre and also denied doing anything wrong.

The ED had raided the premises of rebel AAP MLA from Punjab Sukhpal Singh Khaira, his family members in Delhi and some jailed convicts on Tuesday in a money-laundering case linked to the 2015 Fazilka narcotics trafficking case and a fake passport racket.

Raising the issue of the ED raids during the Zero Hour, rebel AAP legislator Kanwar Sandhu sought a resolution in the House over the matter.

He also demanded that the House should express its “displeasure” over the ED action against Khaira.

Sandhu said what has happened with Khaira could also occur with any other member.

Congress legislator and former minister Navjot Singh Sidhu backed Sandhu and also hit out at the Centre over this issue.

“Are we allowed to question the Centre or not? Are we a free society?” asked Sidhu while condemning the ED raid.

He also slammed the BJP-led government, accusing it of murdering democracy.

Former cricketer-turned-politician later said they have shown “bravery” by bringing a resolution over the matter.

The speaker also said the central agency was not supposed to take the permission of the chair before its any operation.

“But at the same time, during the session, no one can restrain member from attending the house,” he said.

While denying any wrongdoing, Khaira informed the House that the ED officials had taken some diaries which have details about ‘shagun’ of the marriage of his children and some charity work of his daughter.

He further said if the BJP-led government thinks that it can intimidate and gag him, he will continue to raise his voice in support of farmers and human rights violations.