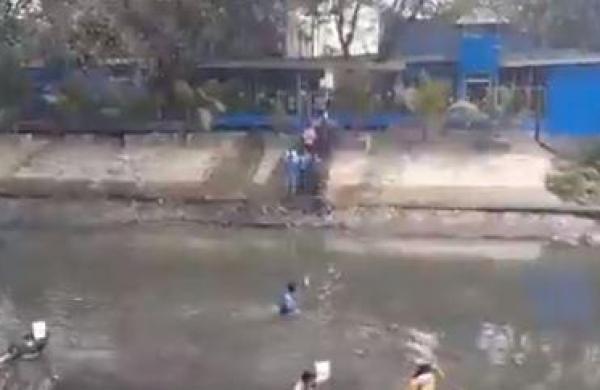 By PTI
KOLKATA: A section of para teachers on Tuesday staged a unique protest to press for their demands by stepping into a canal that flows past the residence of West Bengal Chief Minister Mamata Banerjee.

The group of contractual teachers of government-run schools in the state held placards in support of their demand for a salary hike, in the portion of the waterbody in front of Banerjee’s residence, a high-security zone, officials said.

The protesters were later dispersed by police and disaster management personnel, they said.

Kolkata Police Commissioner Soumen Mitra and other senior officials are at the spot, where security has been beefed up following the incident.

Contractual teachers have been holding a sit-in in the metropolis for more than 70 days, demanding immediate wage revision.

Banerjee had recently announced a three per cent annual pay hike for para teachers in the state budget, but they asserted the raise is not enough.

With the assembly elections round the corner, it has snowballed into a major political issue with the opposition BJP and Left Front accusing the ruling Trinamool Congress of turning a blind eye to the plea of the para teachers.