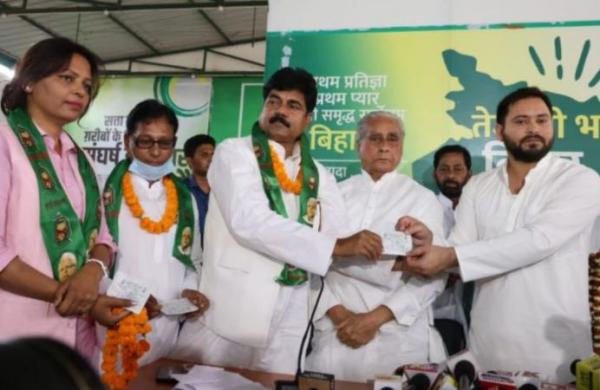 “Only Upendra Kushwaha is left to survive or sink in the RLSP”, he mocked. Quoting an old statement of Upendra Kushwaha, Tejashwi said that once he often used to say that no one needs an enemy if he has a friend like Nitish Kumar.  Now, he is going to be merged with Nitish Kumar and the CM has also become so restless to welcome Kushwaha”, he said.

He also made a frontal attack on Nitish Kumar saying that Kumar survives on the support of “Baisakhi” (support or anchor) of BJP in Bihar.  “In Bihar, the development of double engine has come to a standstill.”, Yadav sarcastically said.

Earlier, on March 6, 41 RLSP leaders had joined the JDU.  Meanwhile, poll analysts Arun Kumar Pandey said that RLSP has been weakened by the desertion of 35 leaders. “ But once Upendra Kushwaha, who has been projecting himself as an alternate to Nitish Kumar is speculated to be under the same man if his party merges ahead with JDU”, Pandey said.

Meanwhile, sources said that the RLSP will merger with JDU after March 14.