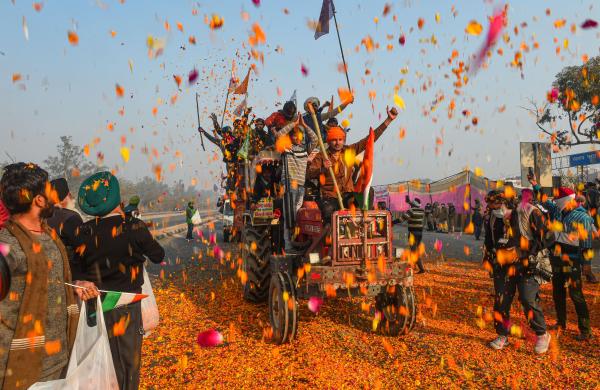 By PTI
JAIPUR: Farmers continued to protest at Shahjahanpur border in Rajasthan’s Alwar district on Friday, vowing to continue the agitation till the farm laws are repealed.

On the same day, Rashtriya Loktantrik Party MP Hanuman Beniwal staged a walk out from Lok Sabha demanding the repeal of the farm laws.

Beniwal”s party was an ally of the NDA government at Centre and had announced separation over the demand to repeal the laws.

Meanwhile, Kisan Mahapanchayat leader Rampal Jat announced their separation with the Sanyukt Morcha, but said he would continue the protest.

“It seems that a conspiracy was hatched by the government as it is a fact that the persons who instigated the farmers on Republic Day have not been arrested,” Jat said.

The farmers’ rally will continue across all the districts, but not on roads, he added.

Beniwal showed a placard and raised slogans demanding repeal of the laws during the President’s address in Parliament and later staged a walk out.

“The Centre should withdraw the laws or else this public movement would intensify. The farmers are protesting without any violence so their demands should be fulfilled. The RLP had supported the NDA in view that would listen to farmers and youth, but to no avail,” he said.

The RLP condemns what happened at Red Fort, he added.

All India Kisan Sabha vice president Amra Ram said those who hoisted flag at Red Fort were not part of the Sanyukt Morcha.

“The government is suppressing voice of farmers. But, we will continue our protest. We will keep a day-long fast on Saturday. Our sit-in protest will continue till the demands are met,” he said.

In Bharatpur, farmers led by Manudev Sinsini staged protests, raised slogans and burnt effigy of the government at the Centre.

The farmers gathered at the power house in favour of farmer leader Rakesh Tikait, who is protesting in Ghazipur.

“Farmers will gather in next three days and thereafter start a tractor rally for Delhi on February 1 to join others participating in the protest. The farmers are 65 of the population of the country and are capable to teach lesson to the government,” he said.