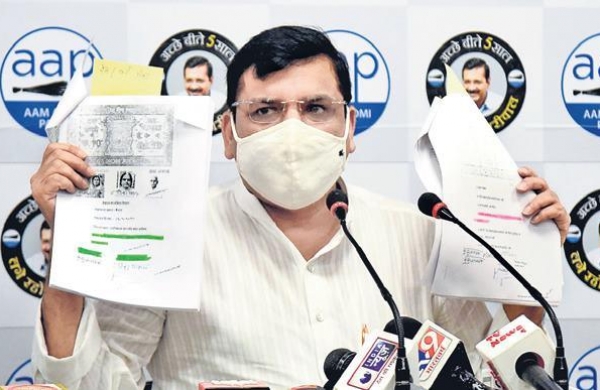 Demanding strict action against those involved in the alleged scam, the parliamentarian wrote in his letter, “I appeal to the chief minister to punish all those responsible for this corruption in the name of Lord Ram. Send all those involved to jail and investigate their bank accounts to unravel how did they sell government land to the trust for crores.”

The AAP has been accusing BJP leaders and the Uttar Pradesh government of being directly involved in corrupt land deals which have created a controversy. Kejriwal’s party has announced that it will be contesting the next Assembly elections in the state, which are likely to be held next year.

The party has been building ground support for the past one year and had also contested local body polls this year. In his letter, Singh also said the Uttar Pradesh government should seize all the money made by the accused people through corrupt land deals.

Singh last week had alleged that Rs 16.50 crore was looted in the name of the temple of Lord Shri Ram to be built in Ayodhya. “Instead of taking action against those involved in the scam and corruption that took place in the name of land in the Ram Janmabhoomi Trust, the entire BJP is standing with property dealers,” Singh had earlier charged.

According to the AAP, the Ram Janmabhoomi Trust bought 12,080 square metres of land worth Rs 18.5 crore on March 18, 2021, which had an original cost of Rs 2 crore. Singh alleged that some BJP leaders were involved in the scam.

Reiterating his stand on the issue, Singh had said, “No matter how many attacks you (BJP) people plan on me, It will not deter me from bringing out the truth in front of the people who have faith in Lord Ram. Our demand is that the people of BJP and the trust should apologise to crores of Hindus and the temple should be constructed soon after sending the dishonest people to jail.”