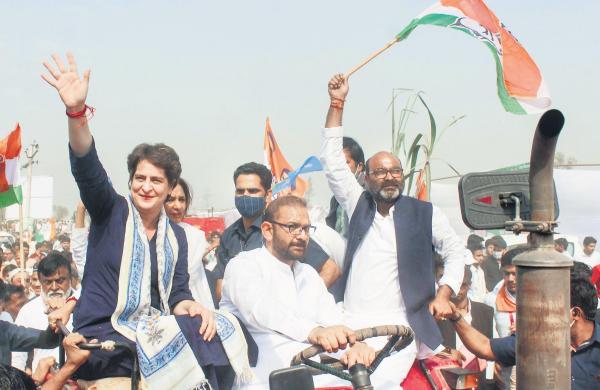 Express News Service
LUCKNOW:  For years those wanting to see Congress do miracles in Uttar Pradesh have been driven to the point of over-ambition, with each election throwing up a disarray that the party has found itself in. In a huge state besieged by a religious divide and riven with caste calculations, the grand old party has not been able to find a ground to support itself, much less deliver a message of cohesion in its ranks.

The prolonged farmers’ protest erupting along the state’s western districts appears to have given the party a chance to reinvent and strategise in the changed political landscape where religion indeed helps in striking a chord. The dates of Priyanka’s religious visits depict an emerging paradigm of the Congress strategy to regain ground in the country’s politically most crucial state where assembly polls are only a year away.

The party has been out of power in the state for almost three decades; it has just one member from the state in the Lok Sabha representing Rae Bareli and seven MLAs in the 403-member state Assembly. Even this flock of seven is not intact as two of them – Aditi Singh and Rakesh Bahadur Singh — representing Rae Bareli have struck discordant notes for quite some time. Ironically, Rae Bareli is the parliamentary constituency of the bparty’s acting president Sonia Gandhi.

The ongoing farmers’ agitation has prompted Priyanka Gandhi to undertake back-to-back forays into UP, of which she is the party in-charge also. “These trips were planned as an offensive against the Centre’s farm laws by holding ‘kisan panchayats’ in western UP. But the trips’ greater symbolism lies in their religious and caste appeals for Mission 2022,” says a political expert.

In her bid to evoke ‘class consciousness’ among farmers, the Congress leader is seen projecting herself as a devout Hindu to counter the BJP’s aggressive narrative. The party has been able to successfully “sell” images of Priyanka with her wrist wrapped in ‘rudraksha.’ There were other pictures mass-circulated: of her offering prayers at the Shakumbhari Devi temple in Saharanpur followed by the ‘sangam snan’ the next day and her seeking blessings from Shankaracharya Swami Swaroopanand Saraswati, followed by a ‘langar’ at Sant Ravi Das temple in Varanasi a week ago.

She has also been trying to placate the Jats, most of whom are concentrated in western UP. The Jats have supported the saffron brigade during the last three elections. The Congress’ attempt to re-strategise was visible first when Priyanka Gandhi reached Rampur to attend an event in the memory of a young Sikh farmer who died during the Republic Day violence in Delhi. This was her first visit to western UP after creating a flutter by visiting the family of the Dalit victim of Hathras gangrape and murder case.

On Feb 10, Priyanka attended a big ‘kisan panchayat’ in Saharanpur. She followed it up with similar gatherings in Bijnor, Muzaffarnagar, Meerut and Mathura. Her images of boat ride at Sangam and her tweet thanking the boatman, Sanjay Nishad, was probably part of her caste outreach,” said Prof AK Mishra, a political scientist. Like the Jats in western UP, the Nishads constitute a major backward caste with a significant caste assertion in the region of the Ganga-Yamuna ‘doab’.

Unlike the Yadavs among the OBCs who had strongly been with the Samajwadi Party and Jatavs among the Dalits with the BSP, the Nishads and other sub-castes have been a floating vote bank who, of late, had been with the BJP. Clearly, the Congress leader has set her sight on this caste calculation. “Only the time will tell how Priyanka’s efforts translate into votes.

Similar efforts by the party leadership went in vain in 2019. Whether such optics help Congress in UP will be interesting to watch,” said Prof Mishra.  “In the presence of strong regional satraps like the SP and BSP and the huge cadre-based party like the BJP, UP won’t be an easy terrain for the grand old party in 2022,” said JP Shukla, a political commentator.

Priyanka’s recent religious tripsFeb 10: Darshan of Shakumbhari Devi in Saharanpur and visit to shrine of a sufi saintFeb 11: Holy dip at Sangam, visit to Mankameshwar Temple in PrayagrajFeb 27: Prayer at Sant Ravidas Temple in Varanasi