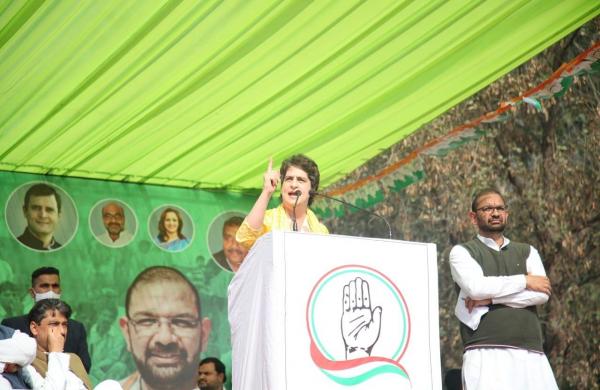 Express News Service
LUCKNOW: Reiterating her rhetoric against the Central government and Prime Minister Narendra Modi, AICC general secretary Priyanka Gandhi Vadra claimed that the land of Lord Krishna will shatter the haughtiness and ego of the BJP government. She was addressing a Kisan Panchayat in Mathura district on Tuesday.

The Congress leader said that the way Lord Krishna brought the ego of Lord Indra, the Rain God down, by holding the holy Govardhan Parvat on his little finger and protecting the people under it, PM Modi’s ego will also be shattered here for turning a blind eye to the issues plaguing the farmers and not repealing the three farm laws.

“This government cut off electricity, shut the water supply, beat and tortured the farmers, but did not listen to them,” the Congress general secretary said.

She said that even after 90 days of relentless protests on the borders of the national capital, the PM did not find it necessary to come and talk to the farmers, nor did he send anyone. “When the ego of a politician becomes supreme, then he loses touch with people,” Gandhi added.

She also raised the issue of cane dues, rising prices of fuel and power tariffs all of which were hurting the farmers’ interests. She said that 215 farmers were martyred during the protest against the farm laws. “This government said it would double your incomes, but nothing has changed since 2019,” she told her listeners.

During the speech, a section of the people raised slogans at the panchayat, seeking her intervention in a rape case in Rajasthan’s Bharatpur. The leader dismounted from the stage to hear the appeals of the people.

Mathura, where Jats make a considerable chunk of the population, was the fourth destination for the Congress leader to address a Kisan panchayat. Prior to it, she had addressed farmers in Saharanpur, Bijnor and Muzaffarnagar. The meeting held on Tuesday was rescheduled due to the demise of captain Satish Sharma on February 19.