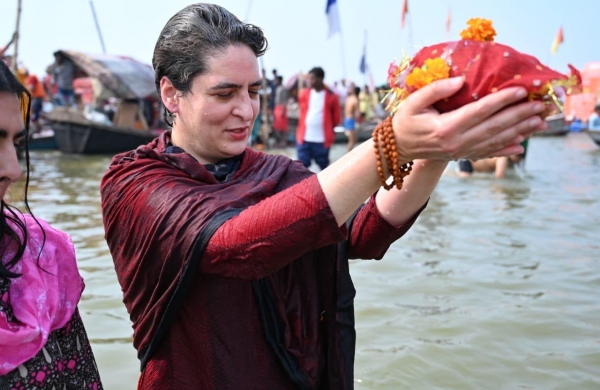 By PTI
LUCKNOW: Congress general secretary Priyanka Gandhi Vadra on Thursday took a holy dip at the Sangam in Allahabad on Mauni Amavasya and performed a puja.

The Congress leader, who arrived here in the morning, reached the Sangam, a confluence of the Ganga, Yamuna and mythical Saraswati river, for taking the holy dip and participation in the puja, Congress media convener Lalan Kumar said.

While returning from the Sangam, she was seen assisting a boatman in rowing.

The Congress leader also visited the Anand Bhawan where she interacted with children from an orphanage, holding a girl in her lap.

She also offered flowers at the place where mortal remains of her great grandfather and India’s first prime minister Pt Jawaharlal Nehru were kept before being immersed in the Sangam.

The Anand Bhawan had been the Nehru family’s residence in the past but it has now been converted into a museum, showcasing India’s Independence movement.

Priyanka Gandhi, who was in Saharanpur on Wednesday to address a farmers’ rally, has lately been making efforts to revive the party’s support base in Uttar Pradesh before the assembly elections next year.