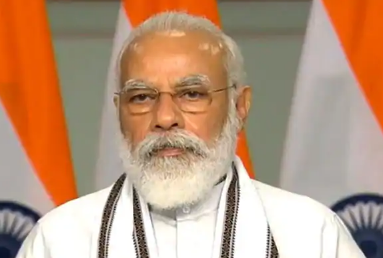 Prime Minister Narendra Modi today distributed property cards of one lakh people in 763 villages of 6 states under the ownership scheme through video conferencing. All the beneficiaries downloaded their ownership card online.

On this occasion, Prime Minister Modi said that the ownership plan is going to help a lot in making our brothers and sisters living in the village self-reliant. It is always said that the soul of India lives in villages, but the truth is that the villages of India were left on their own.

Prime Minister Modi said that big experts all over the world have been insisting that the ownership of land and house has a big role in the development of the country. When there is a record of property, when the property is acquired, then the confidence of the citizens increases.

Targeting the opposition, Prime Minister Modi said that the problems of toilets, electricity were in the villages, the compulsion to cook food in the wooden stove was in the villages. Those who remained in power for many years, made great things, but left the people of the villages to their destiny. I can not let this happen.

He further said that keeping the people of the village in the absence of the poor has been the basis of politics of some people. Nowadays these people are also having problems with the historical reforms that have been done in agriculture, they are shocked. Their fury is not for the farmers, but for themselves.

Prime Minister Modi said that only one-third of the population in the world has a record of their property legally, two-thirds of the people in the whole world do not have it. In such a situation, it is very important for a developing country like India that people have an accurate record of their wealth.