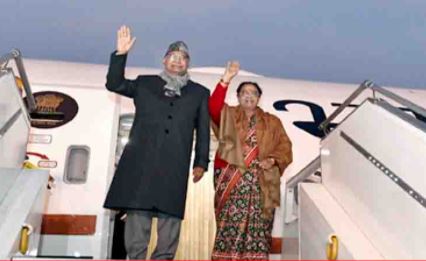 President Ramnath Kovind has left for Chennai from Air India One-B777, a special aircraft that came to India a few days ago. He will also be accompanied by his wife in this journey. Please tell that President Ramnath Kovind of Air India One-B777 also worshiped the first aircraft methodically. With this special aircraft, the President will go to Andhra Pradesh, where he will see Lord Venkateswara Swamy of Tirupati.

President Ramnath Kovind has left for Chennai with his new aircraft today. This information has been given through the President’s tweeter handle. The President wrote on Twitter, “President Kovind boarded an Air India One-B777 aircraft for the inaugural flight to Chennai. President Sri Venkateswara Swamy will go to Tirupati in Andhra Pradesh to worship at the temple. “Prior to the visit, President Ramnash Kovind and his wife duly worshiped the new aircraft.

President Ramnath Kovind met Air Indian and IAF jawans before the visit and also took photographs with them. The President also praised the pilots, crew members and the entire team. He deserves praise for the entire team for operating state-of-the-art airplanes within India and abroad and facilitating VVIP movements.

According to the information received, the President will go to Andhra Pradesh before the special aircraft, where he will worship Goddess Padmavati in Tirupati. After that he will see Lord Venkateswara Swamy in the afternoon.