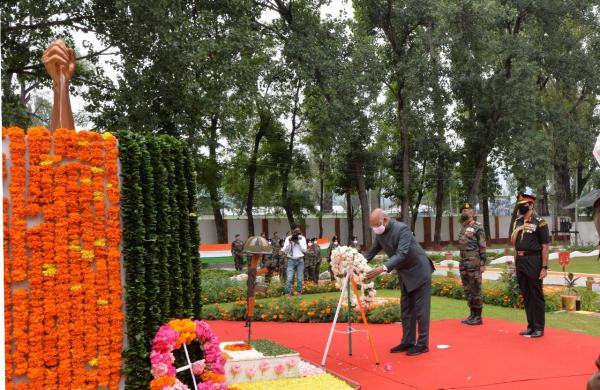 Express News Service
SRINAGAR: Bad weather on Monday led to the cancellation of President Ram Nath Kovind’s visit to Kargil. President Kovind was ascheduled to pay homage to soldiers killed in the 1999 Kargil War with Pakistan at War Memorial Drass on the 22nd anniversary of Operation Vijay.

Amid inclement weather conditions, the President’s plane couldn’t take off from Srinagar. Following the cancellation of his visit, President Kovind laid a wreath at the Dagger War Memorial in Baramulla in north Kashmir and paid tributes to slain soldiers.

India is observing the 22nd anniversary of ‘Operation Vijay’ this year. July 26 marks the victory of Indian armed forces over Pakistan in Kargil peaks during Kargil war in 1999.

It is the second time since 2019 that President had to cancel his Kargil visit on Kargil Vijay Diwas.

In 2019 too, President Kovind had to cancel his visit to the War Memorial in Kargil due to bad weather.

President Kovind arrived in Srinagar on Sunday on a four-day visit to J&K and Ladakh UT.

On July 27, Tuesday, President Kovind will attend and address the 19th annual convocation of University of Kashmir in Srinagar.

In view of the President’s visit, security arrangements have been beefed up, especially in Srinagar.

The security men have set up temporary check points, where the vehicles and commuters are being thoroughly searched.

The tight security arrangements have also been put in place around the venues, which would host the President.