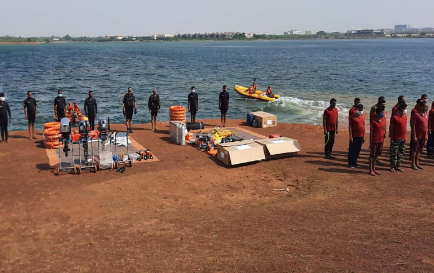 SDRF Raipur rehearsed to deal with disaster like flood before rainy season. A diving scuba exercise of approximately 2 hours, 20 to 25 feet depth of position with underwater camera, and swimming skills were practiced. SDRF incharge Anima S. Kujur said that the exercise of flood disaster, rescue work was started as per the orders of the Director General of Municipal Army, Fire Emergency Services and SDRF. This type of exercise will be done every 15 days. In this episode, 40 SDRF personnel participated in the first rehearsal at Jhanjh reservoir in Nava Raipur. In this exercise, 6 fiber motor boats, 2 rubber motor boats and 1 aluminum boat were mockdill with OBM. It is noteworthy that in the flood disaster of the year 2020, a total of 370 people were rescued by SDR F personnel in district Mungeli, Balodabazar, Bemetra and Parasulidih, Saddu and Birgaon etc. of Raipur district. In addition to flood disaster rescue work on behalf of SDRF personnel, rescue work is also done in natural and man-made disasters like arson, cyclone, earthquake.