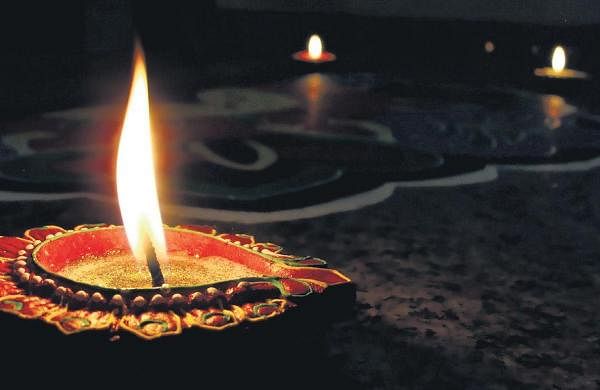 LUCKNOW: Yashpal Prajapati, a potter who spins the wheel churning out diyas (earthen lamps) in Bakshi Ka Talab, is a happy soul this Diwali as sales have really been impressive and people preferred diyas to Chinese lights.

Apart from the general public, diyas were also in demand among political parties to convey messages. While the ruling Bharatiya Janata Party (BJP) reiterated its focus on religious sites by lighting diyas in lakhs in Ayodhya, Kashi and Mathura, the Samajwadi Party tried to embarrass the dispensation by lighting them as a tribute to farmers who lost their lives during the ongoing protest over the three contentious farm laws.

Potters from across the state were a happy lot as their business picked up substantially, with diyas being used for political symbolism in poll-bound Uttar Pradesh. A record nine lakh diyas were lit in Ayodhya, another 7 lakh plus in Varanasi and around the same number in Mathura — enough to convey the nuance of the BJP’s political intent.

With the UP assembly election just a few months away, the BJP is all out to woo social groups through caste conferences. Prajapatis (a subcaste among the OBCs) are engaged in diya making. The ruling party promoted its leader Dharamvir Prajapati as one of the seven newly-inducted ministers in the Yogi cabinet apart from commencing its caste conferences with one for the Prajapati community.

Moreover, this Diwali, in the wake of the border stand-off with China, the swadeshi push of the BJP for diyas over Chinese lights attained a higher pitch. The lighting of diyas across the state in large numbers is also being portrayed by the BJP as a gesture representing the housewarming ceremonies of those who got dwellings in the state. Additionally, the target was also to light another 45 lakh diyas across the state – each of them representing the total number of homeless across rural and urban UP who got a house under the government’s ‘awaas yojana’ initiative.

UP CM Yogi Adityanath had directed officials to ensure that at least one diya was lit at the homes of all those who got a house across the state, whether in an urban setting or rural. As per RSS sources, the Muslim Rashtriya Manch (MRM), a subsidiary of the Sangh pariwar, also lit one lakh diyas across the state as part of its swadeshi push. Government-sponsored Diwali melas at 217 places across the state also added sheen to the festival with the lighting of diyas.

Meanehile, the main opposition Samajwadi Party (SP) directed cadres to light up a diya each in memory of farmers who died while protesting against the government’s three farm laws. “I would want each party cadre to light up a diya for farmers,” SP chief Akhilesh Yadav told his cadres.