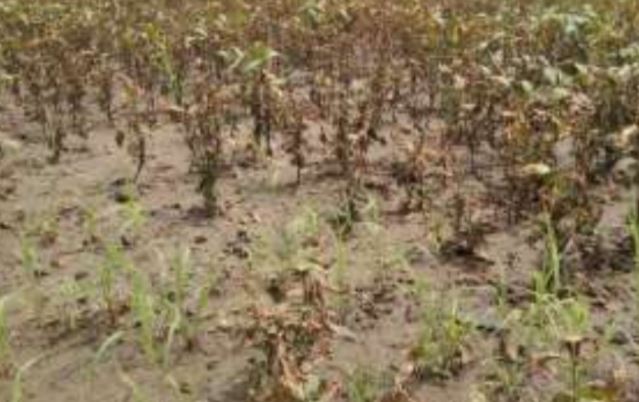 Potato crop has been affected due to fog and felling for three days continuously on a potato crop of nearly two thousand acres in the plains in Surguja district. Due to frequent fog, there has been outbreak of scorching in potato crop. Due to scorching heavy damage has been done. Potato crop is completely scorched, greenery has disappeared, it is difficult to grow tubers. This adverse weather has hurt farmers. Potato crop is grown on a large scale in the months of November-December in the plains of the district. This time, despite expensive potato seeds, farmers have cultivated potatoes.

Due to the tremendous production of potatoes in the plain areas of the district, prices of potatoes, which occupy a prominent position in vegetables, remain stable. Due to lockdown, the arrival of potato reduced and consumption increased due to continuous sale of potato seed up to Rs 40 kg. Now, after the production of new potato in the market in Surguja reached the market, there was a slight drop in the price, demand for new potato has increased and the price of the old potato has automatically increased from 25 to 30 rupees per kg. Due to the large-scale production of potatoes in Surguja district, prices remain stable for about five months, but this time the area is also reduced due to the inflation of seeds and due to sudden change in the weather, the potato crop was affected.

In the plains, the cold has increased since a fortnight and frost also fell for three consecutive days. Along with the effect of frost, fog falling continuously and mist cover till 12 noon has also directly affected the potato. Agricultural scientists had also given timely advice to farmers to maintain moisture in the potato field and smoke the weeds around. The farmers also took all these measures but the potato crop in most of the farmers’ fields in the district has collapsed. According to the farmers, it is now difficult to get tubers because as long as there is greenery in the potato crop, then the tuber also becomes good. After a complete burn, the tuber does not sit and causes heavy damage.