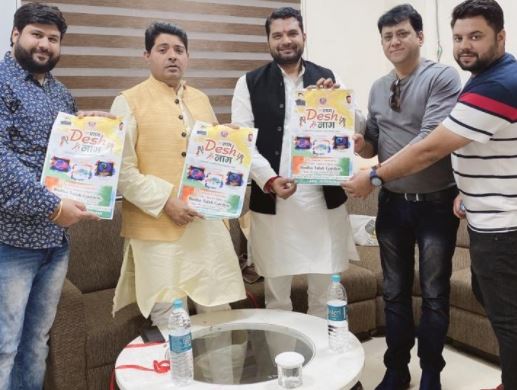 Poster of the program ‘Ek Sham, Desh Ke Naam’, the presentation of Vishwa Sindhi Seva Sangam Women and Youth Wing, was released. The program will be organized at 4 o’clock in the evening of 23 January at Budha Talab Garden in the capital Raipur. Five martyr families will be honored in this program. Kamlesh Patel, the winner of Dance India Dance, has been called as a celebrity guest.

Along with patriotic songs, live band and other participating children will also put dance programs on patriotic songs. On the joint banner of Vishwa Sindhi Seva Sangam Women and Youth Wing, you will get a rare opportunity to see the amazing view of patriotism in the capital. The poster was released by the inspiration of the program, Ijaz Debar, Mayor of Raipur and Conservator, Councilor, MIC Member of Culture, Tourism, Entertainment and Heritage Department, Akash Tiwari. On this occasion, Rahul Khubchandani, Akash Dudani and Anil Jotsinghani, who are managing the program were present.