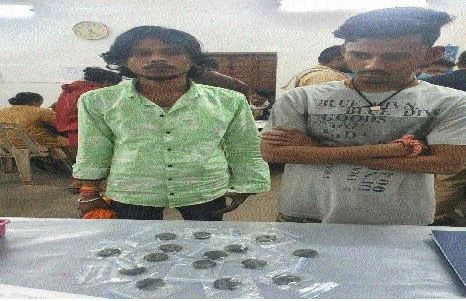 Continuing its crackdown against the drug network in the state capital, Raipur’s D D Nagar police arrested two persons in connection with Charas peddling and recovered around 130.370 grams of drugs. “Following a tip-off that two persons are looking out for customers to dispose-off charas near Bajari Nagar-based Central School, a police team from DD Nagar swung into action and intercepted the duo. During frisking, police have recovered 130.370 grams of charas packed in 15 packets,” said D D Nagar Station House Officer (SHO) Yogita Khaparde, elaborating that the estimated market value of the seized drugs would be around Rs 50,000. The SHO further informed that the arrested were identified as Naveen Verma (26), a resident of Banjari Nagar under D D Nagar police station limits, and Sheikh Sarfaraj (27), of Santoshi Nagar under Tikrapara police station. The arrested peddlers were produced in a local court from where he was sent to judicial custody. With the arrest of the two peddlers, police have launched a probe to ascertain the supply chain of charas in the State Capital and people indulged in the illegal business, said police sources, elaborating that Raipur Police’s campaign against the drug will continue in future as well.