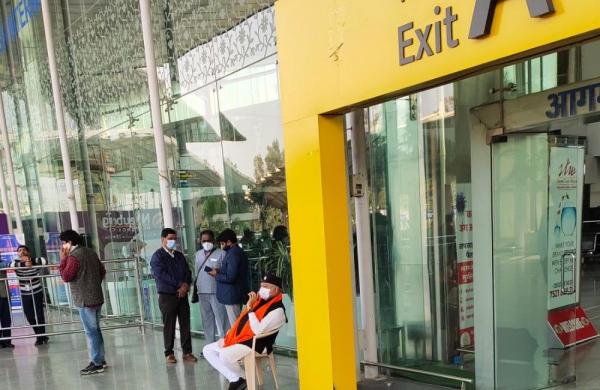 By Express News Service
LUCKNOW: In a high voltage drama, Prime Minister Narendra Modi’s younger brother Prahlad Modi sat on a dharna at Chaudhury Charan Singh airport in Lucknow demanding the release of his supporters who were detained by the Sultanpur police on Wednesday.

Sitting at the airport, Prahlad Modi, vice-president of All India Fair Price Shop Dealers’ Federation (AIFPSDF), questioned the functioning of the Lucknow police and even threatened to go on an indefinite hunger strike if his supporters were not released with immediate effect.

However, later in the evening, Modi ended his sit-in after the release of his supporters in Sultanpur.

Earlier, the Sultanpur police, on Wednesday morning, had arrested Jitendra Tiwari, an aide of Prahalad Modi for putting up posters of Prime Minister Narendra Modi along with UP CM Yogi Adityanath without seeking any permission for using their pictures. The posters also had photos of Home Minister Amit Shah and Dy CMs of the state.

The posters, over an event which had to be hosted by Prahalad Modi on Thursday, were put up at several places across Sultanpur.

According to Sultanpur SP Arvind Chaturvedi, after spotting two posters in the district which read ‘Pradhanmanti Jan Kalyankari Yojna Prachar Prasar Abhiyaan’ and also carried photos of PM, UP CM Yogi Adityanath, and others. A probe was conducted.

Chaturvedi added that after the probe it surfaced that there was no such event of the state government in the district, while there was also no such scheme of the government in connection with the same, or even an event from the BJP.

Based on the information, first, all the posters were removed from the city followed by the detention of  Jitendra Tiwari, the organiser of the event slated for February 4.

An FIR under the charges of dishonesty, punishment for cheating by impersonation, committing forgery was lodged against Jitendra Tiwari, by the local district social welfare officer of the government.

Police claimed that Jitendra Tiwari had not even taken any permission to host such an event in the district where restrictions under Section 144 were still in place as part of COVID protocol.

In the wake of the sit-in by Modi, police officials in the state capital denied having detained or arrested any of his associates in Lucknow.

Further, Deputy Commissioner of Police, Central Zone, Somen Barma, said that Prahlad Modi had not taken permission for hosting an event in the city hence, he was not allowed as per laws. “None of his workers/members/were detained or arrested,” Barma clarified.

Prahlad Modi was also going to host similar programmes in Pratapgarh and Prayagraj. However, the police of both the districts denied any such events to take place.