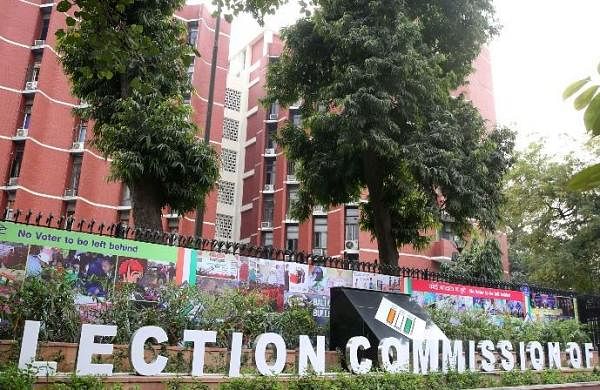 NEW DELHI: Chief Election Commissioner Sushil Chandra and fellow Commissioners Rajiv Kumar and Anoop Chandra Pandey recently held an “informal interaction” with the Prime Minister’s Office to bridge gaps in understanding of key electoral reforms between the poll panel and the Law Ministry, with EC sources insisting on Friday that no impropriety was involved in doing so.

The commission had been pushing for reforms in electoral laws and related issues, and the virtual interaction in November was held to “bridge the gaps in understanding the points of views of the Law Ministry and the Election Commission (EC)”, they said.

Reacting to the development, the Congress on Friday hit out at the government, alleging that it was treating the EC as its “subservient tool”.

Congress general secretary and chief spokesperson Randeep Surjewala charged that the government has fallen to a new low in destroying institutions in the country.

“Cat is out of the bag! What was whispered till now is a fact. PMO summoning ECI was unheard of in independent India. Treating EC as a subservient tool is yet another low in Modi government’s record of destroying every institution,” Surjewala said.

The EC sources said amid a series of correspondence between the government and the poll panel on electoral reforms, the Prime Minister’s Office (PMO) took the lead in organising the “informal interaction” with the three commissioners.

Responding to a news report published on Friday that the Law Ministry had sent a letter to the EC saying that the principal secretary to the prime minister will chair a meeting on common electoral roll and “expects the CEC” to be present, the sources said the three commissioners did not attend that formal meeting.

When asked to explain his remarks, he said his words have summed up everything.

The sources said senior EC officials attended the formal meeting, besides officials from the Law Ministry.

The Legislative Department in the Law Ministry is the nodal agency for EC-related matters.

The sources said the result of the informal interaction with the PMO resulted in the Union Cabinet on Wednesday clearing various electoral reforms that the EC had been insisting be brought in the ongoing Winter Session of Parliament.

One of the reforms is linking Aadhaar with electoral rolls on a voluntary basis.

The other will allow eligible young people to register as voters on four dates every year.

As of now there is one qualifying date — January 1 of every year — to register as a voter for those who have turned 18 or above on January 1.

The sources pointed out that crucial electoral reforms have been pending for the last 25 years.

The EC had been writing to the government for pushing reforms and the Law Ministry had been seeking clarifications.

The informal interaction, the sources said, helped bridge the gaps in understanding on key issues.

“Reforms have to be done like that,” a senior EC functionary said.

There is no impropriety in pushing for reforms, the sources asserted.

They reminded that CECs have written letters to law ministers, including Ravi Shankar Prasad and incumbent Kiren Rijiju, seeking their help in implementing electoral reforms.

Usually, law ministers and legislative secretaries have been meeting the commissioners on various issues at the Nirvachan Sadan.

The commissioners never call on the ministers as part of protocol since the EC is an independent Constitutional body.

Congress leader Manish Tewari on Friday submitted a notice to move an adjournment motion in Lok Sabha on the “summoning” of the EC for a meeting in the PMO to discuss electoral reforms.

In the notice, he raised questions on the autonomy of the poll panel, but Lok Sabha was adjourned amid uproar over the Lakhimpur Kheri violence.

The former information and broadcasting minister said he will submit the notice to move the adjournment motion again on Monday.

“Why was the Election Commission summoned summarily and whether it is a fact that the commission took umbrage to the manner in which they were virtually compelled to attend the meeting in the Prime Minister’s Office,” Tewari said.