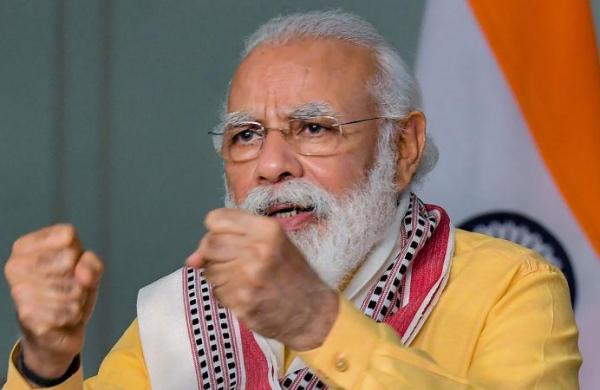 By PTI
GHAZIABAD: Prime Minister Narendra Modi referring to farmers as ‘parasites’ has deeply hurt the farming community, leaders of unions protesting against the Centre’s agriculture laws said on Saturday.

They also called on the farming community to respond to the ‘diplomatic abuses’ with ‘diplomatic punishmen’ by rejecting the government.

The remarks came as farmer leaders Darshan Pal, Balbir Singh Rajewal, Gurnam Singh Chaduni and Rakesh Tikait of the Samyukta Kisan Morcha held an interaction with the press at Ghazipur on the Delhi-Uttar Pradesh border.

The farmer leaders also announced that on Sunday torch processions and candle marches will be organised across the country to pay homage to the soldiers who have laid down their lives in line of action and the farmers who have died during the ongoing stir on the Delhi borders since November.

“The event will be held from 7 pm to 8 pm,” the Bharatiya Kisan Union (BKU) said in a statement.

Farmer leader Darshan Pal said through the “kisan panchayats”, they are trying to put pressure on the government so that it accepts their demands and the protest could end.

“Farmers of the entire country are involved in the movement,” he said.

Referring to a discussion on the farmers’ movement in the British Parliament, Pal said, “The government should understand our problem.”

Balbir Singh Rajewal said the prime minister has given ‘diplomatic gaaliyan’ (abuses) to farmers in Parliament.

“By calling the farmers parasites, he has deeply hurt the entire farming community. The prime minister, through his statement, has given wounds to the farmers of the country that would be remembered for generations,” Rajewal said.

He added that the government has given ‘diplomatic abuses’ to farmers, who should reject it and give a ‘diplomatic punishment’.

Chaduni claimed that with the new laws, the entire business of farming will go to big corporates and the farmers would be left to fend for themselves.

He was also apprehensive that the big corporates would hoard grains in warehouses and control price of crops according to their will.

“Farmers are not going to leave the borders of Delhi without having their demands met by the government,” he added.

Tikait said the protesting farmers are ‘guests of Delhi’ who will keep coming to the national capital and going back to their homes to look after their farms.

“We are holding farmers’ meetings across the country and will keep doing it until the demands are met. We are ready for talks with the government but the channel would remain same – the Singhu border,” Tikait said.

He also said the Samyukta Kisan Morcha will provide a list of questions to farmers who will pose these to their elected representatives.

He called on farmers to keep the momentum of the protests going, along with keeping an eye on their farms.

The farmer leaders also expressed concern over protesters ‘missing’ since the January 26 violence in Delhi and those arrested by police in connection with the probe into the incident.