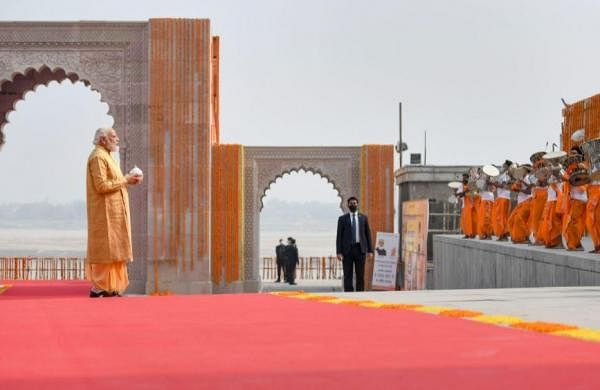 LUCKNOW: Recreating the images of 2019 Kumbh Mela at Prayagraj, where Prime Minister Modi  washed the feet of Dalit sanitation workers ahead of Lok Sabha elections, the PM’s interaction with construction workers of Kashi Vishwanath Dham emerged as one of the main talking points of the inauguration event of the corridor in Varanasi on Monday.

Before inaugurating the phase I of the corridor, Narendra Modi, after performing the ‘Jalabhishek’ of Lord Shiva at Kashi Vishwanath temple, went straight to the construction workers, spoke to them and ate with them.

By virtue of being the Member of Parliament from Varanasi, the PM extended his gratitude to the workers by showering flower petals on them as they worked day in and day out to carve out his dream project within the scheduled time.

Prime Minister @narendramodi felicitates and had lunch with the workers who worked on the construction of #KashiVishwanathDhamPM also congratulates the UP government, CM @myogiadityanath on the completion of this projectRead: https://t.co/HOG8VTfKIg pic.twitter.com/Cj14xyLs26
— PIB India (@PIB_India) December 13, 2021
During his speech in the courtyard of the corridor, the Prime Minister made a special mention of the tireless efforts of the labourers.

“Today, I would also like to thank all my labourer brother and sisters, who shed their sweat to bring this grand complex to life. Even during the difficult Covid-19 times, they made sure that the construction work went on. Just now, I had the privilege of meeting them and seek their blessings,”  said the Prime Minister.

Later in the day, the Prime Minister proceeded to share the dining table and have simple ‘desi’ lunch with around 2,500 construction workers on the corridor premises.

The political pundits feel the gesture of the Prime Minister to acknowledge the efforts of the construction workers and the honour extended to them was significant as it would pay dividends to the ruling party in the coming electoral battle.

PM Modi also thanked others involved in building the complex. “I also thank artisans, civil engineers, officials from the district administration, as well as families who had houses on the land on which the corridor was constructed,” he said.

The PM also congratulated Uttar Pradesh CM Yogi Adityanath and the state government, who, he said, worked tirelessly to complete the project in time.