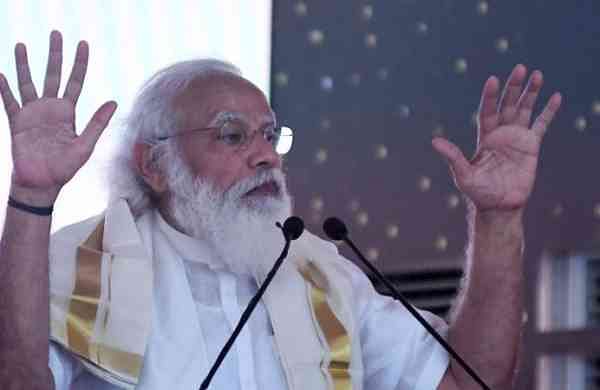 LUCKNOW: Varanasi, the land of Lord Shiva, is set to get the abode for the deity restored in its full glory as Kashi Vishwanath Corridor, the dream project of Prime Minister Narendra Modi who would inaugurate the ambitious Rs 900-crore project in his parliamentary constituency Varanasi on Monday.

On Tuesday, the Prime Minister will address the chief ministers of BJP ruled states giving them the tips on good governance in Varanasi.  As per the state government sources, the KV Corridor project ensconced in a sprawling 5 lakh square feet, will complement the Purvanchal Development Corridorand “will be a glorious reflection of the rich cultural and historical heritage of Kashi.”

The inauguration ceremony will be aired live in 20,000 temples across the country.

The PM will reach the venue on a boat via holy Ganga to inaugurate the project worth over Rs 700-crore, the three-day extravaganza on December 12, 13 and 14 will be celebrated like Diwali and Dev Deepawali with huge participation by people of Varanasi.

A direct access to Kashi Vishwanath Dham temple from the side of river Ganga has become possible with the completion of project The Corridor has been carved out by decongesting around 400 houses and small temples present insides the houses around the temple complex which was originally present in just 3500 square ft area. The State government to give shape to the ambitious project bought all those houses surrounding the temple complex on three sides.

As per the state government sources, total Rs 451.90 crore were spent to purchase the surrounding properties and rehabilitating over 1100 familes. The total length of the newly constructed corridor now stands at 900 metre with its width being 75 metre. While constructing the corridor, while 24 newstructures were built as part of the project, 43 old structures were restored along with the main temple.

“The temple will be inaugurated on December 13 at an auspicious time,” Nagendra Pandey, one of the priests at Kashi Vishwanath eemple, said.

According to Varanasi divisional commissioner Deepak Agarwal, Varanasi residents have been asked to decorate their homes and create a festive environment resurrecting the ambience of ‘Dev Deepawali’ on the evening of inauguration.  Special decorations of ghats and prominent buildings of Kashi hasbeen done as part of the ‘Bhavya Kashi, Divya Kashi’ programme on December 13.

After December 13, there would be a door-to-door distribution of ‘prasad’ of Kashi Vishwanath temple and a booklet on the history of the temple. Divisional commissioner Deepak Agrawal said that the PM was expected to reach KV Dham via Ganga on December 13 and enter the project area from Jalasen Ghat, the entry point of the corridor at the river bank. After reaching KV Dham campus, he would perform the rituals of opening this ambitious project at Mandir Chowk.

Prime Minister Narendra Modi had laid the foundation stone of the corridor in March 2019. The idea behind the Corridor project has been to preserve the existing heritage structures, provide new facilities around the temple complex, decongest the traffic and movement of people around the temple. The idea was to connect the temple with ghats with direct visibility, said the authorities concerned.

The project, which has come up on public-private partnership model, ensures easy walking passages for devotees, utility zones as well as procedures in place for crowd management and emergency operational procedures, said Bimal Patel, the project architect.

Sharing more details about the project, Patel said that around 70 per cent of the total project area has been kept open for the green cover.

A statue of Maratha queen Maharani Ahilyabai Holkar, who has reconstructed the Kashi Vishwanath temple, would also be installed as part of the corridor. As per the estimates, over 70 lakh devotees and tourists visit the Kashi Vishwanath Temple every year with a daily footfall of 10,000 mostly from Varanasi and adjoining areas.

The Corridor project is made secured by equipping it with state-of-the-art facilities. An integrated command and control room would ensure foolproof security of Kashi Vishwanath Corridor, said Commissioner of Police A Satish Ganesh.