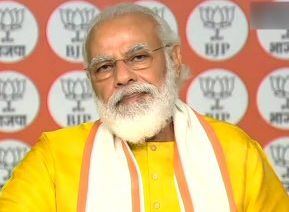 Prime Minister Narendra Modi will inaugurate and lay the foundation of 30 projects worth Rs 614 crore in Varanasi via video conferencing on Monday, a Bharatiya Janata Party (BJP) leader said on Sunday.

At a press conference on Sunday, Kashi region BJP president Mahesh Chandra Srivastava said that PM Modi will inaugurate 16 schemes worth over Rs 219 crore and lay the foundation of 14 projects worth over Rs 394 core.

BJP unit chief in Uttar Pradesh Swatantra Dev Singh and four ministers will attend the ceremony at different venues in the city, he said.

Srivastava said the transformation taking place in Kashi since 2014 was visible on the ground, He underlined that there was a big difference between the Varanasi of 2020 and the situation in the city pre-2014.

As the local MP, PM Modi had left no stone unturned to ensure all-round development of Varanasi, he said. The cleanliness mission had made lanes and ghats clean, he added.

Six places have been selected for the live telecast of Monday’s programme in the city. Locals and party workers will join the event at the Circuit House, Dashashwamedh Ghat, Shultankeshwar Temple, Lal Bahadur Shastri International Airport and Trade Facilitation Centre.

Similarly, UP BJP co-incharge Sunil Ojha and Cantt MLA Saurabh Srivastava will be present at the commissioner’s auditorium.

Minister of state (independent charge) for tourism and religious affairs Neelkanth Tiwari, along with party workers, will be present at Dashashwamedh Ghat. Cabinet minister Anil Rajbhar will be present at the venue of the Trade Facilitation Centre, Bada Lalpur.

MLAs Avadhesh Singh and Surendra Singh will attend the function at the airport and Shultankeshwar temple respectively.

The local unit of the Congress has objected to the unveiling ceremony of the projects due to the model code of conduct for the legislative council polling to elect graduate constituency members. Congress leader Ajay Rai says that the so-called developmental projects unveiling ceremony is a violation of the model code of conduct. The administration should stop it. A Congress delegation on Saturday submitted a memorandum to the divisional commissioner Deepak Agarwal asking him to stop the event.