Prime Minister Narendra Modi today offered a scathing rebuttal to Rahul Gandhi’s allegations and made a point-by-point refutation of the charges levelled against his government by the Congress and MPs and other opposition leaders.

The Prime Minister’s speech also marked the conclusion of the 12-hour-long marathon debate, which was followed by a voting on the no-confidence motion against his government.

The voting resulted in a comfortable win for the government with 325 MPs voting against the motion, while 126 MPs voted in favour of it. A total of 451 MPs participated in the voting.

Here is how PM Modi countered opposition charges in his speech:

On Rafale deal with France

Following Rahul’s allegation of corruption in the Rafale strike, the Prime Minister said that he is astonished at the manner in which the Congress party is “trampling upon the truth”.

The Prime Minister alleged that the people of this country are being misled on the issue of Rafale deal.

The Prime Minister also responded to the French statement saying that a breach of the agreement between the two nations could impact security and operational capabilities of the defence equipment of India and France.

“Unfortunate that both countries had to respond to the allegations on this childish acts,” the Prime Minister retorted at Rahul’s allegations.

The Prime Minister dismissed the allegations by saying that the agreement signed between the two nations is “completely transparent”.

The Prime Minister slammed the Congress and said that it should refrain from indulging in “childish acts” and politics on matters related to national security.

The Prime Minister lashed out Rahul’s reference to ‘jumla strike’ and equated it to the surgical strike carried out by India across Pakistan.

“You called the surgical strike a Jumla Strike. You can abuse me as much as you want. Stop insulting the Jawans of India. I will not tolerate this insult to our armed forces,” the PM retorted.

On conflict with China in Doklam

“When the entire country was working hand-in-hand to resolve the Doklam issue. The Congress to score their own political point met China’s ambassador. When you don’t have knowledge of an issue things get misconstrued. This affects the nation more than the person talking.”

The Prime Minister took at dig at the Congress president’s apparent post-hug wink in Parliament saying the entire nation saw what the eyes did today. 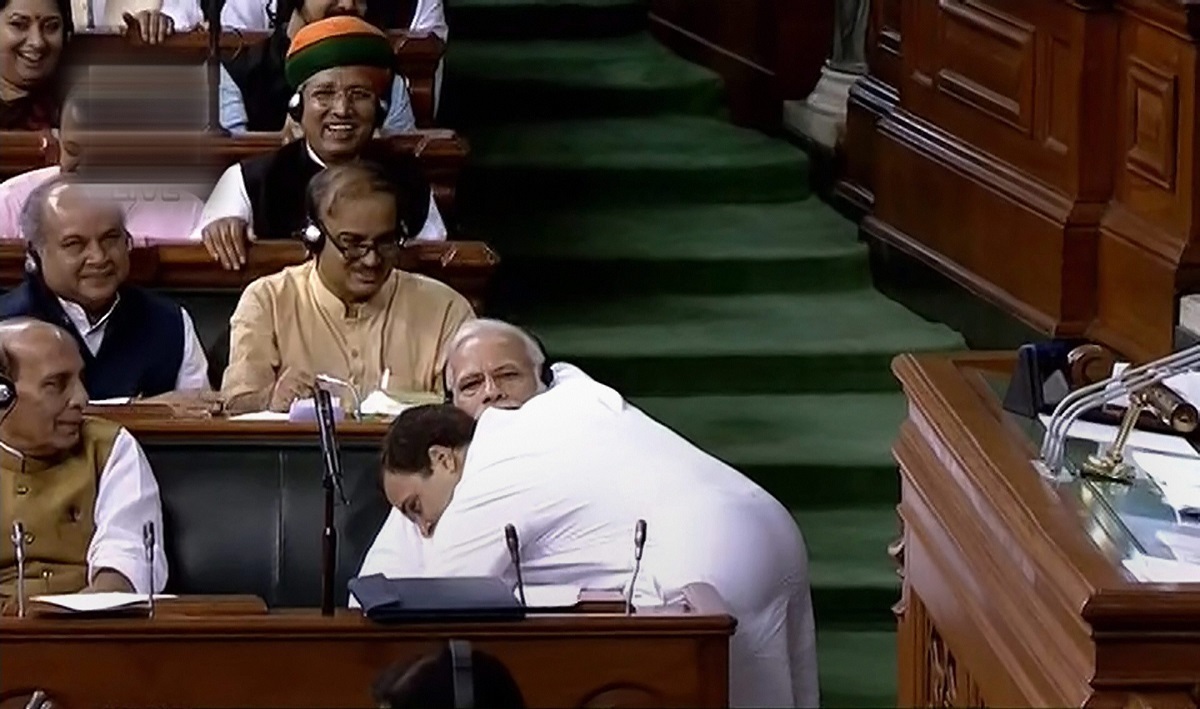 PM Modi mocked Rahul for gesturing him to stand from the seat before the now-famous hug, saying the Congress leader was in a hurry to unseat him and grab the PM’s chair, as he dubbed the no-trust vote an act of “arrogance”.

“In the morning, the voting was not over, the debate was also not over one member comes running to me saying- Utho Utho Utho (get up, get up)…What is his hurry to come to power? Let me tell this member it is the people who elected us. That is how we have come here,” PM Modi said taking a dig at Rahul’s move.

Sant Ravidas inspired the society to rise above caste: Governor