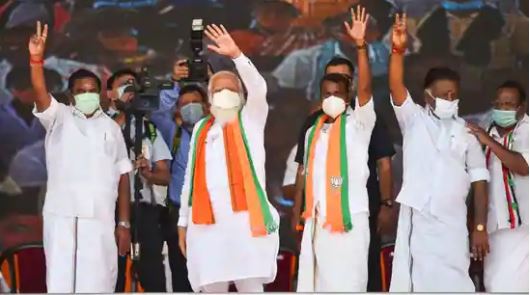 Prime Minister Narendra Modi on Tuesday targeted the Congress and Dravida Munnetra Kazhagam (DMK) in Tamil Nadu, saying his Bharatiya Janata Party (BJP) is contesting on the basis of “development agenda” but leaders of the opposition parties are focused on “dynasty agenda”. PM Modi also said opposition parties don’t have anything positive to offer. “In their speeches, all they do is demean others and spread lies,” PM Modi said while addressing a rally in support of the candidates contesting from the southern state.

PM Modi also said the National Democratic Alliance (NDA) family is “seeking vote based on our solid agenda of all-round development inspired by the ideas of ‘Amma’ Jayalalithaa and MGR.” “Vote for the BJP is a vote to solve long-standing issue of the state,” he also said during the public meeting.

“We want to promote Tamil culture. We are promoting technical and medical education and if possible we will do it local language,” PM Modi told the crowd.

Referring to DMK leader Dindigul Leoni’s derogatory remark against women, PM Modi said, “to insult women is part of the Congress-DMK culture.” “A few days, one of MLA candidates of DMK, Mr Dindigul Leoni made horrible remarks against women. DMK has done nothing to stop him,” he added.

Leoni, a veteran leader of the DMK party, said that the “milk of foreign cows turning women into barrels.” He made the sexist remark while campaigning in Coimbatore for the April 6 election.

“I want to tell the Congress and DMK- the people of Tamil Nadu are noting everything. They will never tolerate insult to the women of the state,” PM Modi also said.