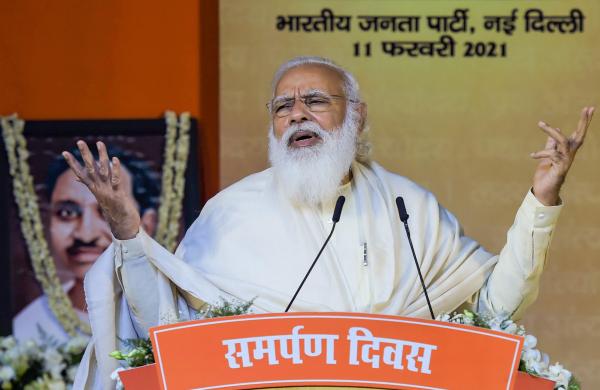 By ANI
NEW DELHI: Prime Minister Narendra Modi on Thursday recalled the contributions of party ideologue Deen Dayal Upadhyay towards building a self-reliant India, stating that the leader had called for self-reliance way back during the Indo-Pak war in 1965.

“Deendayal Upadhyay Ji’s thoughts are equally relevant today and will continue to be so. In 1965, during the Indo-Pak war, India had to depend on foreign countries for weapons. Deendayal Ji had said at that time that we need to build an India that is self-reliant not just in agriculture, but also in defence and weaponry,” PM Modi said while speaking at the Samarpan Diwas on the occasion of Upadhyay’s death anniversary.

“Today, the self-reliant India campaign is becoming the medium for building the future of the village’s poor, farmers, labourers and middle class,” PM Modi said, adding that the vision on the local economy is proof of how practical and comprehensive Deen Dayal Upadhyay’s thinking was even in those times.

“Today, with the mantra of ‘Vocal for Local’, the country is realising his vision,” he said.

In light of the ongoing COVID-19 pandemic, he said that with the power of self-reliance, the country had delivered the COVID-19 vaccine to the whole world.

“In this COVID-19 period, the country displayed the spirit of Antyodaya, and cared for our country’s poor. With the power of self-reliance, the country has also proved the Integral Humanism Philosophy, delivered medicines to the whole world, and is delivering the vaccine today,” he added.

He further said that the transformational changes taking place in the field of infrastructure will make the lives easier and India will get a new modern image, and with the stature of the country rapidly growing, every Indian will be proud of today’s India.

PM Modi also elaborated that in politics, consensus is valued, and although the majority runs the government, the country runs with consent.

“We value consensus in politics. I said in Parliament that a majority runs the government but the country runs with consent. We have not just come to run the government, we have come to take the country forward. We fight against each other in elections, it does not mean that we do not respect each other,” he said.

On the occassion, the PM, along with party President JP Nadda paid floral tributes to the leader.

He became president of the Jana Sangh in December 1967. He contested the Lok Sabha election and lost. He passed away on February 11, 1968.