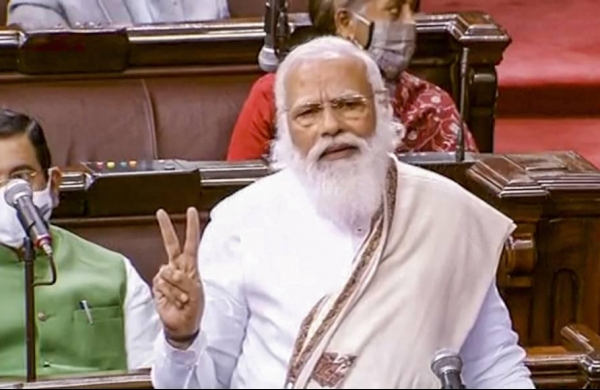 By ANI
NEW DELHI: Defending Centre’s policies for farmers and referring to those taking a “U-Turn” from laws, Prime Minister Narendra Modi on Monday quoted his predecessor Manmohan Singh who had once called for making one single market for agriculture produce.

“Manmohan Ji is here, I would read out his quote. Those taking a U-Turn (farm laws) will perhaps agree with him. ‘There are other rigidities because of marketing regime set up in the 1930s which prevent our farmers from selling their products where they get the highest rate of return…” said PM Modi in his reply to the Motion of Thanks on the President’s Address in Rajya Sabha.

“…It is our intention to remove all those handicaps, which come in the way of India realising its vast potential at one large common market,” he added.

“Manmohan Singh Ji had made his intentions clear to give farmers the freedom to sell their produce, and have just one market. And we are doing it now. You all should be proud. ‘See, what Manmohan Singh Ji had said, Modi is having to do now. (woh Modi ji ko karna pad raha hai). Be proud!” PM Modi said.

PM Modi’s statement comes amid the protest staged by farmers at different borders of the national capital since November 26 last year against the three newly enacted farm laws: Farmers’ Produce Trade and Commerce (Promotion and Facilitation) Act, 2020; the Farmers Empowerment and Protection) Agreement on Price Assurance and farm Services Act 2020 and the Essential Commodities (Amendment) Act, 2020.

The Prime Minister also said, the eyes of the world are on India and there are expectations that India will contribute to the betterment of our planet.

On Friday, the marathon debate in the Rajya Sabha on the motion of thanks to the President’s address concluded with 50 speakers from 25 political parties taking part in the discussion, which was spread over three days.

The discussion was one of the longest such debates with high participation of members, said officials.

Eighteen members from BJP, seven of Congress and 25 from other parties had participated in the debate.