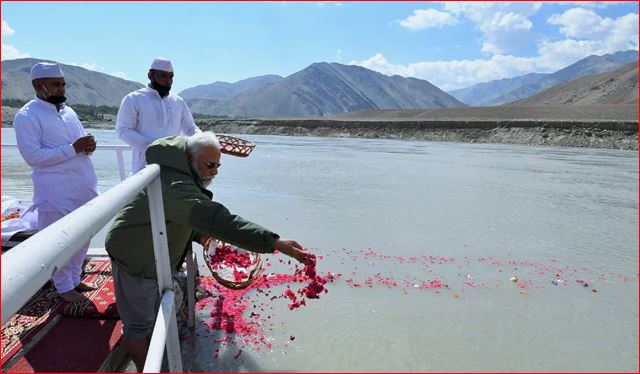 Prime Minister Narendra Modi held a Sindhu Darshan puja at Ladakh’s Nimu on Friday, during a one-day visit to an Indian Army base in the union territory, days after 20 soldiers were killed in a violent face-off with the Chinese troops in the Galwan region.
The Sindhu Darshan festival is a three-day event celebrated in June every year on the day of the full moon. The festival recognises the Sindhu (Indus) river as a symbol of unity, peaceful co-existence and communal harmony.

PM Modi also visited the War Memorial’s Hall of Fame to honour soldiers who had died for their country and the Army General Hospital to interact with those injured in the Galwan violence.

During his visit, seen as a response to increased Chinese aggression at the LAC (Line of Actual Control) since May, the Prime Minister, without naming China, said: “Age of expansionism is over, this is the age of development. History is witness that expansionist forces either lost or were forced to turn back.”