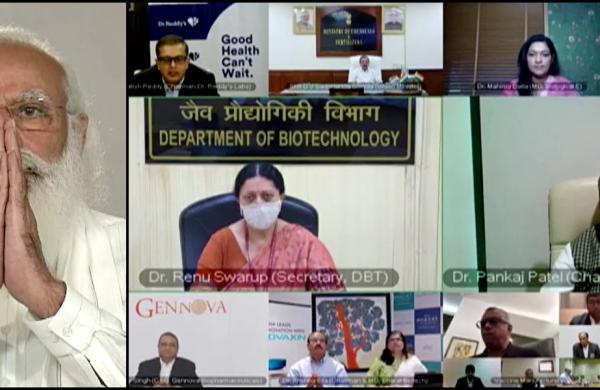 By ANI
NEW DELHI: Prime Minister Narendra Modi on Tuesday interacted with vaccine manufacturers in the country via video conferencing and urged them to continuously scale up the production capacity to vaccinate people in the shortest possible time.

He applauded the vaccine manufacturers for their achievements and professionalism and said the biggest strength of country’s vaccine industry is its ‘Samarthya, Sansadhan and Seva Bhaav’ and these attributes makes them a vaccine leader in the world.

He said the government has now allowed the vaccination programme for every adult starting May 1 believing in the ability of the vaccine manufacturers. According to a PMO release, he also appreciated the efforts and studies being conducted by scientists in development of new vaccines.

The Prime Minister credited the manufacturers for developing and manufacturing vaccines in record time. Noting that vaccines manufactured India are the cheapest, PM Modi said the world’s largest vaccine programme is underway in the country.

The Prime Minister said that throughout the process of developing and manufacturing vaccines, the country has constantly worked with the spirit of public-private partnership under the ‘Mission Covid Suraksha’ and created an end-to-end vaccine development ecosystem.

He said that this will require better coordination between hospitals and industry. The release said that the vaccine manufacturers thanked the Prime Minister for the government’s decision of allowing vaccination for everyone above the age of 18 and various steps taken to give more incentives and flexibility.

They also appreciated the Prime Minister’s leadership for the support they have received from the Centre throughout the process of vaccine development and production. They also discussed their plans to ramp up production, upcoming vaccine candidates and research on the new variants.