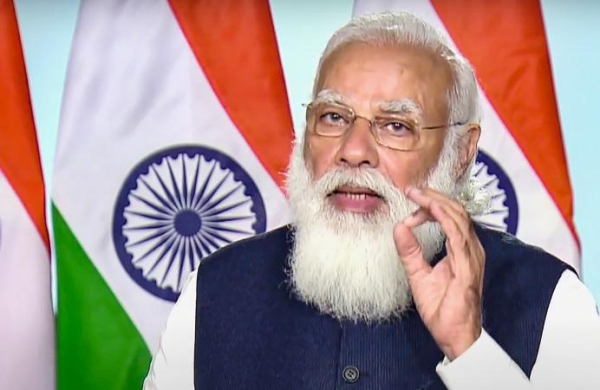 By ANI
NEW DELHI: Prime Minister Narendra Modi on Friday expressed solidarity with the people of Sweden in wake of the violent attacks that took place on Wednesday wherein as many as eight people were injured.

“I express solidarity to the people of Sweden, on behalf of all Indian citizens, over the violent attack that took place the day before yesterday in Sweden. We hope that the injured recover soon,” the Prime Minister said during an India-Sweden virtual summit alongside his Swedish counterpart Stefan Lofven.

As many as eight people have been injured in a knife attack in southern Sweden on Wednesday (local time).

According to a report by Anadolu Agency, the attacker, identified as a 20-year-old male by the Jonkoping county police department, was shot and wounded by police in the Vetlanda locality, where the incident took place.

The Prime Minister stated that “coordination”, “cooperation” and “collaboration” has become “even more important today” between like-minded countries.

“Shared values of democracy, human rights, rule of law, equality, freedom, justice strengthen our relations and mutual cooperation. The important issue of climate change is a priority for both of our countries and we would like to work with you on this,” he said.

This is the fifth interaction between the two leaders since 2015.

Prime Minister Modi had visited Stockholm in April 2018 for the First India Nordic Summit. Lofven had visited India in February 2016 for the special ‘Make in India’ week. Earlier, the two leaders had met on the sidelines of the UN General Assembly in September 2015. In April 2020, the two Prime Ministers had a telephonic conversation to discuss the situation arising out of the Covid-19 pandemic.

India and Sweden have warm and friendly relations based on shared values of democracy, freedom, pluralism and rules-based international order. Both countries have very close cooperation in the areas of trade and investment, innovation, science and technology as well as research and development.

Around 250 Swedish companies are actively operating in India in various sectors such as health and life sciences, auto industry, clean technology, defence and heavy machinery & equipment. Around 75 Indian companies are also active in Sweden.