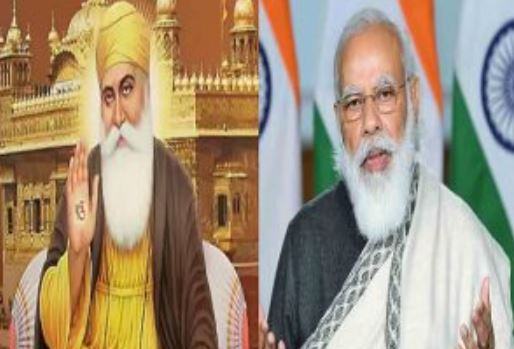 Prime Minister Narendra Modi (PM Naredra Modi) has greeted the countrymen on Guru Nanak Jayanti on Monday. PM Modi wrote a congratulatory message on Twitter in Punjabi language and remembered Sikh Guru Nanak Dev. Today, the 551st Prakash Parv of Guru Nanak Dev is being celebrated. Please tell that on the full moon day of Kartik month, the birth anniversary of Guru Nanak Dev is celebrated. On this occasion, there is a festive atmosphere in different parts of the country, gurdwaras have been decorated.

Prime Minister Modi tweeted on Monday and wrote, “I salute Shri Guru Nanak Dev Ji for his illumination. His thoughts keep inspiring us to serve society and ensure a better world.

President Ram Nath Kovind wrote on Twitter while congratulating the countrymen on the occasion of Prakash Parv, on the auspicious occasion of Guru Nanak Dev’s birth anniversary, I wish all the countrymen and all Indians abroad, especially brothers from the Sikh community And heartfelt greetings and best wishes to the sisters. Come, on this auspicious occasion, let us all follow his teachings in our conduct. He further wrote, Guru Nanak Dev showed the people the path of unity, harmony, fraternity, harmony and service and gave an economic philosophy to realize a lifestyle based on hard work, honesty and self-respect. His life and his teachings are the inspiration for all mankind.

Former Congress President Rahul Gandhi has congratulated the countrymen on Twitter on this occasion. He wrote, “Salutations to Guru Nanak Dev Ji who taught me truth and brotherhood, far from ego.” Best wishes to all of you, Guru Purab.