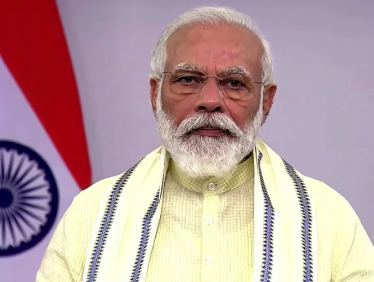 Prime Minister Narendra Modi on Monday praised Union finance minister Nirmala Sitharaman after she annouced measures worth Rs 73,000 crore to stimulate consumer spending in the economy in an effort to fight the slowdown due to the coronavirus pandemic.

Today’s announcements by FM @nsitharaman Ji are timely moves which will boost consumer spending and sentiment as well as push capital expenditure. These steps will also boost demand in our economy,” PM Modi tweeted.

Sitharaman’s Rs 73,000 crore package included advance payment of a part of wages to central government employees and cash in lieu of Leave Travel Concession (LTC). She said as much as Rs 11,575 crore would be paid as LTC allowance and advance to these employees on the condition that they spend the amount on non-essential goods before March 31 next year.

She said the government will give its employees income tax-exempt cash vouchers in lieu of their entitled travel allowances this year. This cash will have to be spent on buying goods that attract 12% or more GST, in a condition which eliminates the possibility of the cash being spent on essential items. The government will also give as a one-time measure give Rs 10,000 salary loan to all its officers and employees as festival advance.

All these measures are likely to create an additional demand of Rs 73,000 crore,” Sitharaman said, adding the proposals would stimulate demand in a “fiscally prudent way.”

States would separately be eligible to get Rs 12,000 crore in 50-year interest-free loans for capital expenditure, while the Union government will spend an additional Rs 2,500 crore toward capital expenditure on roads, defence infrastructure, water supply and urban development.

The government, which had in May announced a Rs 20 lakh crore ‘Aatmanirbhar Bharat’ stimulus package, is pushing ahead with a full opening to try to boost the economy ahead of the usually high-spending festival season.

A tough lockdown imposed to stem the spread of coronavirus had resulted in the GDP contracting by a record 23.9 per cent during April-June. Analysts have predicted that the economy may be headed for its worst contraction this fiscal.