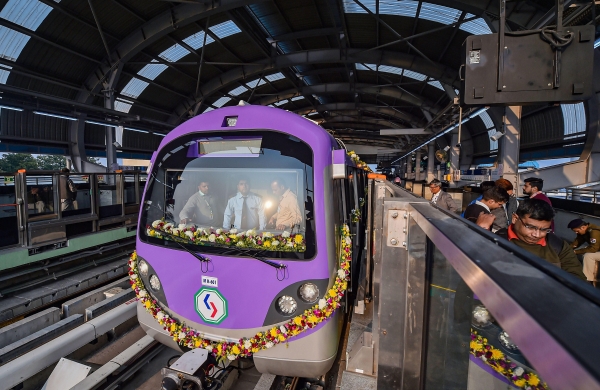 By PTI
HOOGHLY: Prime Minister Narendra Modi on Monday inaugurated the extension of Kolkata Metro Railway from Noapara to Dakshineswar, revered for the over 160-year-old temple of Goddess Kali, apart from other railway projects in West Bengal.

He flagged off the inaugural train from Noapara to Dakshineswar in the 4.1-km stretch of the north-south corridor of the metro railway, built at a cost of Rs 464 crore, through virtual mode from here.

“It has now become very easy for devotees to visit the Kali temples at Kalighat and Dakshineswar,” he said.

Commuters would be able to travel from Kavi Subhash station in the southern end of the city to Dakshineswar in just over an hour, traversing around 31.3 km, which takes about two and a half hours by road, the prime minister said.

“Our pledge for self-reliance and self-belief will be strengthened with betterment of transport facilities.”

“I am happy that the ‘Made in India’ mark is clearly visible in all projects of the country, whether it is the Metro or the railway system,” the prime minister said.

Noting that indigenous technology is being used from track-laying work to manufacturing modern coaches and engines, Modi said, “This has increased speed of work, ensured better quality and reduced investments”.

Maintaining that West Bengal has been an important centre of the country’s self-reliance, Modi said that there are immense opportunities in the region for trade and business with the north-east and neighbouring countries.

The rail network here is being strengthened in view of these possibilities, the prime minister said.

READ| West Bengal has made up its mind for ‘poriborton’, says PM Modi

The under-construction Sevoke-Rangpo rail line will connect Sikkim with West Bengal and trains are being run to destinations in Bangladesh, with the latest being from Haldibari, Modi said.

Highlighting that construction of several overbridges and roads under bridge projects have been taken up in the last six years by the Railways, he said, the four projects inaugurated on Monday will further strengthen the state’s rail network.

Enumerating the benefits of the projects which were inaugurated on Monday, he said that the 30-km long third line between Kalaikunda and Jhargram will facilitate faster movement of trains in the Kharagpur-Adityapur section and reduce delays in the Howrah-Mumbai route.

This is the first phase of the 132-km long Kharagpur- Adityapur third line project, for which a total of Rs 1,312.44 crore cost has been estimated, a railway official said.

The project covers 55 km in West Bengal and 77 km in Jharkhand, the official said.

The doubling of the 14.60-km long Azimganj-Khagraghat Road line, constructed at a cost of Rs 239.38 crore, will ensure better connectivity to north Bengal and the northeast, apart from reducing congestion in Murshidabad district, Modi said.

The 11.28-km long fourth line between Dankuni and Baruipara of Howrah-Bardhaman chord line, built at a cost of Rs 195 crore, and the 42.

42-km long third line between Rasulpur and Magra of Howrah-Bardhaman main line, which entailed an expenditure of Rs 759 crore will reduce congestion and ensure faster movement of trains.

These new lines will ensure better connectivity with places where there are coal, steel and fertiliser industries, thus providing impetus to new ventures, the prime minister said.

Besides Kolkata, people of Hooghly, Howrah and North 24 Parganas are now deriving the benefits of Kolkata Metro Railway, Modi said.

The extension of Metro Railway will help students and workers in their commute, specially for travelling to and from Indian Statistical Institute (ISI), Rabindra Bharati University and the economics department on Calcutta University campus.

Railway Minister Piyush Goyal said that the projects which were inaugurated during the day will strengthen connectivity of West Bengal with other parts of the country.

He also said that to facilitate the farmers in the state, 68 ‘Kisan Rail’ services have been run in West Bengal.