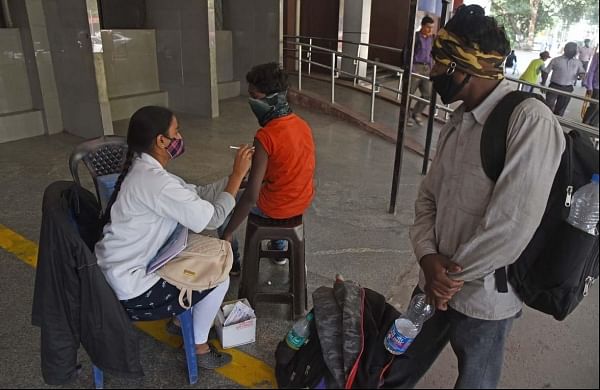 NEW DELHI: Prime Minister Narendra Modi on Saturday announced precautionary additional Covid19 vaccine doses for healthcare and frontline workers across India, saying that they may be at a higher risk of contracting infection in case there is a surge of infection, in the wake of threat from the Omicron variant.

In an address to the nation, he said the precaution dose will also be available for citizens above 60 years of age and with comorbidities on the advice of their doctor from January 10 next year as well.

The precaution dose denotes a third dose of the vaccine for the fully vaccinated but Modi refrained from using the term “booster dose”, as it is generally referred.

Administration of vaccine for this group of population, estimated to be around 3-4 crore in number, will begin on January 10.

He also announced that beginning January 3, adolescents aged 15-18 years will be eligible for Covid19 vaccination.

Additionally, people aged 60 and above with comorbidities will also be eligible for booster or additional shots of Covid19 vaccine, on their doctor’s advice, starting January 10.

The mega announcements by the PM come even though the country’s top advisory panel on immunization was yet to give its final recommendation on booster doses or vaccination for kids.

Amid Christmas and the coming new year festivities, Modi asked people to be alert and take all preventive measures but added that they should avoid panic as he reassured them about the health measures in place to deal with any exigencies.

Administration of nasal vaccine and world’s first DNA vaccine against Covid will soon start in India as well, he said The prime minister said global experience shows that following all preventive measures at a personal level is “big weapon” to fight Covid and so is vaccination.

This is time to be careful, while engaging in festivities, he said.

“I would urge all of you not to panic, be careful and alert. Remember to mask up and keep washing hands,” Modi said.

Noting that India started giving the vaccine to its citizens from January 16 this year, Modi said due to the people’s collective effort and will, India has crossed the “unprecedented” and very difficult milestone of having administered 141 crore vaccine doses.

Underlining that he was sharing key decisions with the people of the country on the occasion of Christmas, Modi said that vaccination for children between the age of 15 years to 18 years, will start in the country on January 3, 2022.

This will reduce the worries of children going to schools and colleges and their parents, and boost the fight against the pandemic, Modi said, adding that the move is also likely to aid in normalisation of teaching in schools.

“We all have experienced that the corona warriors, healthcare and frontline workers made a huge contribution in keeping the country safe in this fight. They still spend a lot of his time in the service of oronavirus patients,” he said.

“Therefore, from the point of view of precaution, the government has decided that ‘precaution dose’ of vaccine will be administered to healthcare and frontline workers from January 10, Monday” Modi said.

This will strengthen the confidence of healthcare and frontline workers, he said.

Giving an overview of healthcare infrastructure in the nation, Modi said that as the virus is mutating, “our confidence to take on challenges is also multiplying”.

“Our innovative spirit is also growing. The country today has 18 lakh isolation beds, 5 lakh oxygen supported beds, 1,40,000 ICU beds. If ICU and non-ICU beds are taken together, there are about 90,000 beds for children. Today the country has over 3,000 PSA oxygen plants functioning and four lakh oxygen cylinders have been provided across the country,” he said.

“States are being helped to prepare a buffer dose of necessary medicines. They are also being provided with adequate testing kits,” he said.

The decision, said the PM, had been taken by the government in the interest of people at large.

He cautioned people not to panic but to stay vigilant, citing conflicting data from several other countries which are seeing a fresh wave of Covid19 infection.

Modi also said that a nasal vaccine against Covid19 is on the cards in India, apart from world’s first DNA vaccine (ZyCov D by Zydus Cadila) against Covid19.

Lauding scientists and health workers, he said the seriousness of vaccine was identified very early and along with research on it, work was also focussed on approval process, supply chain, distribution, training, IT support system and certification.

Modi emphasised that India’s fight against the virus has from the very beginning been based on scientific principles, scientific consultation and scientific method.

Eleven-month vaccine campaign, the prime minister said, has brought relief and normalcy in the everyday lives of the countrymen.

Economic activities have been encouraging compared to many countries of the world, he said while noting that alertness remains of paramount importance.

He also cautioned against efforts to spread rumours, confusion and fear by some quarters.

Modi’s address came on a day officials said the Drugs Controller General of India (DCGI) has granted emergency use authorisation to indigenously-developed Bharat Biotech’s Covaxin for children above 12 years with certain conditions.

It is the second vaccine to receive the regulator’s nod for use among those below 18 years after Zydus Cadila’s needle-free COVID-19 vaccine ZyCoV-D.

The significant announcement on booster doses for healthcare and frontline workers comes amid growing clamour for the third shot of Covid19 vaccines for them as there is growing evidence of high breakthrough infections due to the Omicron variant.

More than two months after an expert panel endorsed Covaxin for kids, the Drug Controller General of India on Saturday approved the Covid19 vaccine by Bharat Biotech for the 12-17 age group in India.

#WATCH | Roll out of nasal vaccine and world’s first DNA COVID vaccine will start soon in our country: PM Narendra Modi pic.twitter.com/duvNp2zg2s
— ANI (@ANI) December 25, 2021
However, the country’s highest drug regulator has permitted the vaccine only for adolescents and not for kids under 12, as recommended by the subject expert committee on Covid19 in October.

Earlier, the Hyderabad based vaccine maker had said that it had submitted data from clinical trials in the 2-18 years age group for Covaxin to the regulator which was thoroughly reviewed by the Central Drugs Standard Control Organization and the subject expert committee.

“This represents one of the first approvals worldwide for Covid-19 vaccines for the 2-18 age group,” the  company had said . “We now await further regulatory approvals from the CDSCO prior to product launch and market availability of Covaxin for Children.

Raches Ella, clinic lead of Covid vaccines at the company had also  said in a tweet that Covaxin has been “reported to be safe and immunogenic” in a pediatric cohort and “the approval in children will help expedite the reopening of schools”.

Now, Covaxin has become the second vaccine, after Zydus Cadila’s ZyCoV D, to be permitted for under 18 population group in India even though the country is yet to clearly spell out its policy on Covid vaccination for minors.

Approved for adolescents aged 12-17 years of age in August by the DCGI, along with adults, ZyCoV D however is still to be rolled out for any population group in the country.

Meanwhile, Officials in the CDSCO said that though the amount of Covaxin recommended for minors remains the same—0.5 ml—as it is for adults and will also be administered in two doses- 28 days apart- there will be slight difference in the approach.

“It has been discussed that for adolescents, vaccines can be supplied in pre-filled syringes—instead of vaccines being taken out of vials at the time of administration,” said an official.

This, officials said, was recommended in order to ensure that exactly the specified quantity of vaccines are administered in kids as the higher quantity may lead to adverse effects.