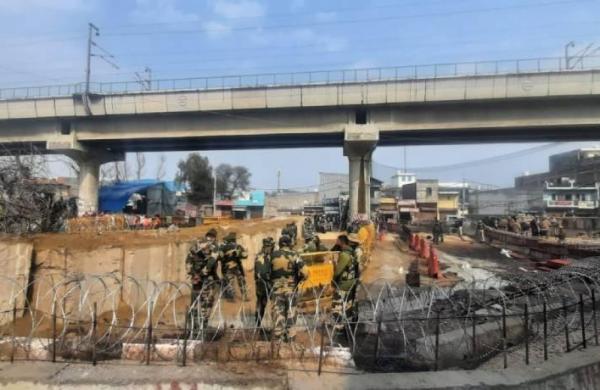 By PTI
NEW DELHI: Opposition parties on Thursday tore into the government’s handling of the farmer protest against three contentious farm reform laws, saying ministers believe in monologue and trenches have been dug, barbed wires put up and spikes installed when bridges should have been built to win over farmers.

Opening the second day of discussion on a motion thanking the President for his address to the joint sitting of Parliament at the start of the Budget Session, Manoj Kumar Jha of the RJD said the government has lost the patience to hear and any criticism is painted as anti-national.

“With folded hands, I request you to please understand the pain of farmers. In harsh winter you stopped water supply and toilet facilities, dug trenches, put barbed wires, and installed spikes,” he said.

“Such aggressive approach wasn’t even heard of towards the neighbouring nations who came inside (the Indian territory).”

To the response to a tweet by pop star Rihanna on the farmer protest, he said the democracy will not be weakened by a tweet but by the approach of the government.

In a veiled reference to cold storage chain and godowns built by private corporates such as Adani Group, he said, “Your backbone is the farmer.303 (seats won in last general elections) did not come from cold storage or godowns but from these very people.”

“We will support you but every world against you is not anti-national. Patriotism is not be worn on sleeves but carried in heart,” he said in his speech loaded with poetry and sarcasm.

Stating that protests and agitations are the lifeblood of democracy, he contested the government statement of 11 rounds of dialogue have concluded with agitating farmers, saying its ministers “believe in monologue and not dialogue.”

“They talk of having given this and that to farmers, but there is no place for language of charity in a democracy. The monologues should be ended,” he said.

Jha said critics and agitating farmers have been painted as ‘Khalistani’, ‘Naxals’ and Pakistani agents and its citizens pitted against each other just like the agitation against the Citizenship Amendment Act (CAA).

“You have lost the patience of hearing, you only dictate,” he said.

“The governments are formed to build bridges but you have built walls.” Referring to the over two-month-long agitation by farmers on the border entry points to the national capital, he said trenches have been dug, barbed wires erected and spikes installed to cut off farmers.

“I haven’t been to a border but pictures I have seen don’t resemble anything close to what has been done around farmer agitation sites,” he said, adding water supply as been snapped and toilets facilities taken away.

“Who are you fighting? They are your own farmers,” he said.

Bihar, he said, ended minimum support price (MSP) based crop procurement in 2006 and it now has only contractual labourers and not farmers.

“Bihar has been turned into a labour-supply state. You want Bihar model in Punjab and Haryana?” he asked.

He wondered what would have been the reaction if the JP movement would have happened during the present regime.

ALSO READ | Agri laws: We can bring down government, warns Tikait; Tomar says not having informal talks with farmers

Participating in the debate, Digvijaya Singh of the Congress lashed out at the BJP government, saying right from demonetisation to the CAA were blunders that hit the people hard.

Almost 50 lakh people were rendered jobless and micro, small and medium enterprises were destroyed, he said.

Singh said the void between the Modi government’s promises and implementation was big and it could not win the hearts of people, whether the poor, farmers or labourers.

The senior Congress leader also accused the government of mismanaging the COVID-19 pandemic and fuelling corruption.

Terming the three farm laws “anti-farmers”, he said the prime minister had lost their trust and even the Bharatiya Kisan Sangh was opposed to some of the government’s moves and took a jibe at him asking whether he wants to keep relations with RSS.

In democracy, he said, if people’s sentiments are seen as revolution than it is autocracy.

“You have got majority but dissent is essence of democracy,” Singh said.

Former prime minister and JD(S) leader H D Deve Gowda called farmers the backbone of the country and said miscreants and anti-social elements were behind the events of Republic Day and all political parties have condemned their actions and agree that they need to be punished.

But the farmers’ issue should not be mixed with it, he said and added that the issue should be dealt with amicably.

Delhi witnessed violence on Republic Day during the farmers’ tractor rally called to highlight their demand for repeal of the Centre’s three farm laws.

Deviating from the designated route for the tractor parade, some protesting farmers clashed with police and reached the historic Red Fort and hoisted flags from some domes as well as the flagpole there.