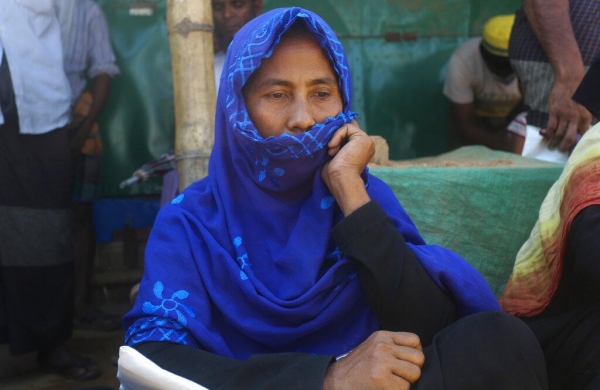 By Express News Service
NEW DELHI:  A plea has been filed in Supreme Court seeking the release of over 150 Rohingya refugees detained in a Jammu sub-jail and stall their deportation by the Centre.

The application was filed by Rohingya Muslim refugees Mohammad Salimullah and Mohammad Shaqir.

An intervention application has been filed in the pending matter before the top court, which also sought direction to Ministry of Home Affairs to expeditiously grant refugee identification cards through the Foreigners Regional Registration Office (FRRO) for the Rohingyas in the informal camps.

The application filed by Salimullah through advocate Prashant Bhushan, said that it is filed in the public interest in order to secure and protect the right against deportation of the refugees in India.

As per the application, nearly 150 to 170 Rohingya refugees in Jammu were detained in a sub-jail on or around March 7 after verification by their embassy. They face the threat of being deported.

“Disturbing reports from Rohingya families have come in that subsequent to a biometric verification of Rohingya refugees undertaken by the Jammu and Kashmir administration, some people never returned to the camps and were jailed by the police,” stated the application filed on behalf of the two by advocate Prashant Bhushan.

“The jail has been converted into a holding centre and the Inspector General of Police (Jammu) has indicated that the refugees could be deported to Myanmar,” the application reads.

The plea said that it is filed to protect rights guaranteed under Article 14 and Article 21, read with Article 51(c) of the Constitution, against the deportation of Rohingya refugees who have taken refuge in India after escaping widespread violence and discrimination against their community in their home country Myanmar.

“Release the detained Rohingya refugees immediately and direct the Union Territory government and the Ministry of Home Affairs to expeditiously grant Refugee identification cards through the FRRO for the Rohingyas in the informal camps,” it said.

It sought direction to the Union Government to refrain from implementing any orders on deporting the Rohingya refugees, who have been detained in the sub jail in Jammu.

“Direct UNHCR to intervene and determine the protection needs of the Rohingya refugees not just in the Jammu but also in camps across the country and complete the process of granting them Refugee cards,” it said.

The application said that on August 8, 2017, the Ministry of Home Affairs, has issued a letter to all the Chief Secretaries of all the State Governments/UT Administrations, raising a concern regarding the increased “illegal immigrants’ in India and their purported “grave security challenge.”

“That the petitioners faced an imminent danger of being deported vide the government circular which directs the relevant authorities to identify and expeditiously deport illegal Rohingya refugees, which is why the petitioners approached this court for protection,” it said.

The petitioners further submitted that this proposed deportation is contrary to the Constitutional protections of Article 14, Article 21 and Article 51(c) of the Constitution of India, which provides equal rights and liberty to every person.

The plea said that despite these Constitutional and International law requirements, the Centre has failed to carry out their obligations to ensure protection to the Rohingya Community, by proposing to deport the Community to Myanmar, where they face serious violence and persecution.

Referring to recent media reports, which said that nearly 150-170 Rohingya refugees in Jammu have been detained, the plea said that new circumstances have arisen even when the matter is pending before the court.

“This follows after the Union Minister Jitendra Singh’s statements two months ago that the Rohingya (identified as Muslim refugees by the government) wouldn’t be able to secure citizenship. These refugees have been illegally detained and jailed in the Jammu Sub Jail which has been converted into a holding centre with the IGP (Jammu) Mukesh Singh stating that they face deportation back to Myanmar following verification by their embassy,” the plea said.

The plea claimed that most of the Rohingya refugees have cards issued by the UN High Commissioner for Refugees (UNHCR) acknowledging their status as refugees and granting them protections.

According to official documents from the office of deputy commissioner of Jammu, there are 6,523 Rohingya in Jammu, it said.

On January 10, last year, the top court had said that it would hear in detail, a batch of pleas challenging the Centre’s decision to deport illegal Rohingya Muslim immigrants to Myanmar.

The top court is also seized of petitions which support the government’s stand to deport over 40,000 Rohingyas, who fled to India after violence in the Western Rakhine State of Myanmar and are settled in Jammu, Hyderabad, Haryana, Uttar Pradesh, Delhi-NCR and Rajasthan.

One of the intervention application is filed by the United Nations special rapporteur saying that the Centre’s decision for mass deportation of the Rohingya as being “impermissible under international human rights law”, and India should ensure that the Rohingyas enjoy “equality before the law and equal access to judicial remedies and individualised forms of due process”.

Initially, two Rohingya immigrants — Mohammad Salimullah and Mohammad Shaqir, who are registered refugees under the UNHCR, had moved the apex court in 2017 challenging the move to deport to Rohingyas on various grounds including that it violated international human right conventions.

The Centre had questioned the bona fides and motives of the NGOs and individuals seeking facilities for the Rohingya refugees, and stated that there is no discrimination between Indians and outsiders in providing health and education facilities.

The apex court had on October 13, 2017 said the Rohingya refugee problem was of a “great magnitude” and the state would have to play a “big role” while dealing with the contentious issue.

The court had suggested to the Centre not to deport these refugees but the government had urged that it should not be written in the order as anything coming on record would have international ramifications.