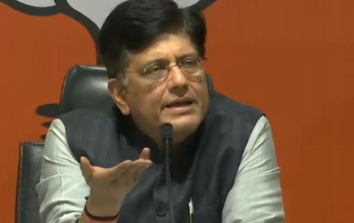 A day after the death of Union Minister Ram Vilas Paswan, President Ram Nath Kovind has given additional charge of Ministry of Consumer Affairs, Food and Public Distribution to Railway Minister Piyush Goyal.

A release issued by the President’s office said, “On the advice of the Prime Minister, the President of India has directed that Cabinet Minister Piyush Goyal be given additional charge of the Ministry of Consumer Affairs, Food and Public Distribution apart from his existing departments. ”

The Union Cabinet mourned the death of Paswan, and also observed two minutes of silence in memory of the late leader. The cabinet approved a state funeral for Paswan and passed a resolution stating, “The cabinet expresses deep grief over the demise of Union Minister of Consumer Affairs, Food and Public Distribution, Ram Vilas Paswan.” With his death, the nation has lost a prominent leader, a distinguished MP and a qualified administrator.