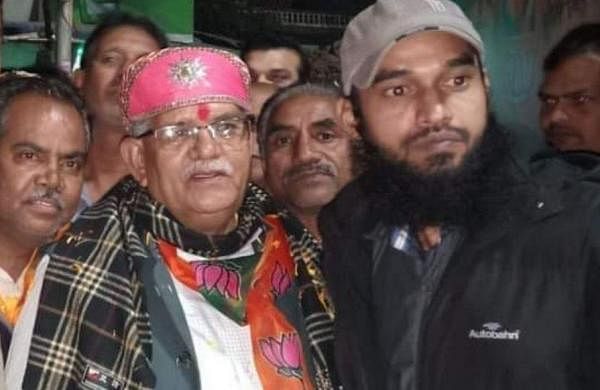 JAIPUR: A major controversy has erupted after a picture of Udaipur murder accused Riyaz Attari with leader of the opposition Gulabchand Kataria went viral on social media.

The picture is reportedly from a 2018 event. Also, an old post of a worker associated with BJP Minority Morcha surfaced in which he has described Riyaz as a BJP worker.

On social media, the leaders of the BJP Minority Front had shared photos with Riyaz several times. Tahir shared a post in November 2019 and wrote for Riyaz, “Har Dil Aziz, our brother Riyaz Attari, a BJP worker was welcomed on his arrival in Udaipur from Umra’s Ziarat. May Allah accept all the prayers of Riyaz Attari Bhaijaan, Amen.”

This post was put on Tahir’s Facebook account on 25 November 2019.  In this, Tahir and Chainwala and another BJP leader are seen garlanding Riyaz.  At the same time, in many posts related to Tahir, a Facebook account named Riyaz Attari has been mentioned.  But that account is no longer visible. In this regard, Irshad Chainwala said that he has no connection with Riyaz. Riyaz had returned from Mecca-Medina after performing Umrah.  Then he was welcomed with a garland. Chainwala claims he was introduced to Riyaz by Tahir.

Photos of Riyaz have also surfaced with Udaipur BJP District President Ravindra Shrimali. However, Shrimali said that Riyaz has nothing to do with the party. “Riyaz is not a member of our party. If anyone can stand and take a picture in the crowd, then such a person cannot be linked to any party. All this is being done by the opposition party under a conspiracy. We are ready to be investigated by any agency,” he remarked.

However, BJP in Rajasthan on Saturday denied the allegation and said that the Udaipur accused has never been a member of the party.

M Sadiq Khan, Rajasthan BJP Minority Morcha state president said, “BJP is world’s largest party and hence anybody can come and click pictures with our leaders. But this doesn’t mean that he has been our party member. The accused has never been a member of our party. The state government due to its failure, wants to hold someone responsible. I request the Chief Minister to leave his post,” he said.