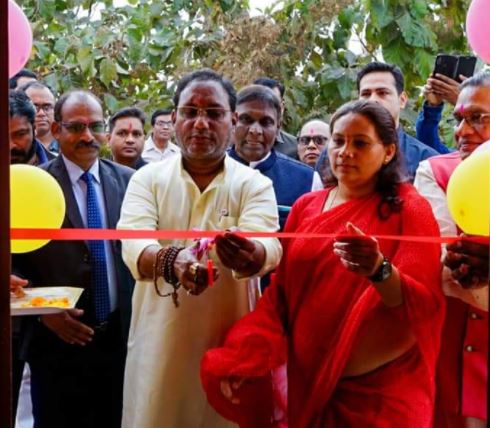 Health Engineering and Village Industries Minister Guru Rudrakumar attended the Parmeshwari Festival of Dewangan Samaj held at Bhilai-3 today. He also inaugurated the community building of Dewangan society during the Parmeshwari festival. On this occasion, Minister Guru Rudrakumar said that the state government is working for economic development while saving the cultural prosperity of Chhattisgarh. Along with economic development, we are also working to save our cultural heritage. Rural economy has been strengthened by plans for rural development. Due to this, the rural economy has a positive impact on the urban economy as well and the path of economic progress has been opened for citizens of all classes.

Minister Guru Rudrakumar said that through the Narva, Garwa, Ghurwa, Bari scheme in rural areas, the doors of economic growth have opened. There is a plan to supply water from house to house through the Minimata Scheme and through the schemes of the Public Health Engineering Department, so that all households have safe drinking water. We are committed to provide pure drinking water to all people and are working continuously in this direction. With this, a new base of economy has been established in the rural sector through the Godhan scheme. Public Health Engineering and Village Industries Minister said on the occasion that due to agriculture related schemes of the state government, the farmer has returned to farming. The record paddy purchase this time shows that the trend of farmers towards agriculture has increased significantly. Chhattisgarh is a rice bowl. Returning trend towards agriculture will strengthen the rural economy and a strong rural economy is the foundation of a strong urban economy. The minister said that the Dewangan society has always been a leader in social work. The people of the society have always been in the forefront of service. There is always a lot of happiness between you all. Today, with the launch of community building of the society, people will now get better facilities in social programs.