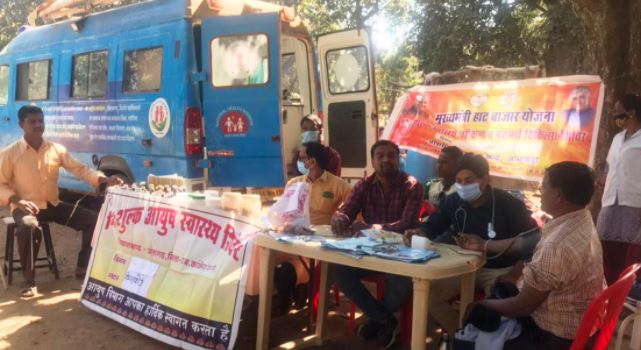 The Chief Minister’s Haat-Bazar Clinic Scheme has been launched by the State Government on 02 October 2019 with the objective of providing health care to the villagers of remote and identified areas, giving the benefit of health facility to the villagers in the market place itself. It is often seen that villagers give priority to the market day for the treatment of their minor ailments. Keeping this in view, this scheme has been started by the Chief Minister Mr. Bhupesh Baghel to provide health facilities to the villagers who have come to the markets in the markets. Since the beginning of the camp, 64 thousand 617 patients have been treated in the clinic of hot markets in Kanker district. Health check-up of the villagers is being done free of cost and distribution of medicines and medicines by setting up camps in all the 56 development-halls of all the seven development blocks of the district. Ambulance facility has also been made available to all the seven development blocks by the district administration. In a program organized by Chief Minister Shri Bhupesh Baghel at Govindpur on January 28, 8 ambulances were flagged off for the Chief Minister’s Haat-Bazaar Scheme, all the ambulances have reached their designated headquarters.
The Chief Medical and Health Officer, Dr. J.L. Uike said that so far, 2756 camps have been conducted in the district, 64 thousand 617 patients have been treated and free medicines were given. In the camp, besides health tests for common diseases like cold, cough, fever, vaccination of pregnant women and infants including malaria, TB, HIV, blood pressure, diabetes, anemia, leprosy, eye disorders, diarrhea and health related counseling. Free medicines are given to them by giving and treating them. He said that under the Chief Minister’s Haat-Bazar Clinic Scheme, the villages where the Haat-Bazar is set up and away from the Primary Health Center and Community Health Centers are providing medical facilities to the villagers by setting up camps by the Health Department, whose Villagers are benefiting. Health staffs organize camps in the Haram-bazaars of Charama, Bhanupratappur, Kanker, Narharpur, Koylibeda, Durgukondal and Antagarh development blocks of the district and patients are given free medicines and necessary medical advice.