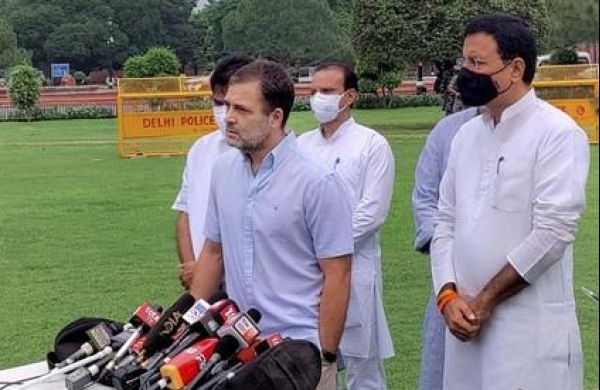 By Express News Service
NEW DELHI:  With the Pegasus snoopgate pushing the government to the back foot, the Opposition raised the heat further as Congress leader Rahul Gandhi accused Prime Minister Narendra Modi and Home minister Amit Shah of committing ‘treason’ by deploying the military grade cyber weapon against citizens and institutions.

In the Rajya Sabha, Trinamool member Santanu Sen was suspended for rest of the session as he snatched and tore up a copy of a statement on Pegasus from Information Technology Minister Ashwini Vaishnaw the previous day. V Muraleedharan (BJP) moved a motion for suspension of Sen, which was accepted by voice vote.

Sen’s refusal to leave the House resulted in one of the day’s multiple adjournments. Leader of the Opposition in Rajya Sabha Mallikarjun Kharge told the chair that he has given notice for suspension of business to discuss the surveillance. But, the Centre said the minister had already made a statement on it. “The Trinamool wants the Parliament to function. But we want discussion on Pegasus and scrapping of three farm laws immediately,” said Trinamool’s Rajya Sabha floor leader Derek O’Brien.

No substantial business could be transacted in the Lok Sabha, as ruckus continued over various issues, including Pegasus.

Outside Parliament, Rahul Gandhi demanded a Supreme Court monitored probe on snooping and the resignation of Shah. But, BJP’s Rajyavardhan Rathore rebutted the charges, saying no one’s phone had been illegally tapped, adding Rahul should submit his cell phone to a probe agency for a thorough probe.

Opposition parties have stalled proceedings in Parliament alleging the union government’s involvement in the alleged snooping following reports that nearly 300 mobile phone numbers including of journalists, activists, opposition leaders from India and even of union ministers figured in a list of potential snooping targets by Israel’s NSO group which sells its Pegasus spyware only to “vetted” governments and government agencies.

The media reports have been published by The Wire in collaboration with 16 other international publications including the Washington Post, The Guardian and Le Monde, as media partners to an investigation conducted by Paris-based media non-profit organisation Forbidden Stories and rights group Amnesty International.

Congress Friday claimed the grant allocation to the National Security Council secretariat went up to Rs 333 crore in 2017-18 from Rs 33 crore the year before, and asked if this hike was related to “purchasing” the Israeli spyware.

43 crore to the National Security Council Secretariat in terms of grants.

This amount was marginally increased to Rs 20.

06 crore in 2013-14, he said, noting that National Security Council Secretariat is largely concerned with administration and co-ordination.

In the year 2014-15, when the Modi government came to power, the amount of grant to the National Security Council Secretariat increased to Rs.44.46 crore, further it came down to Rs 33 crore in 2016-17, Khera said.

“But what raises serious red flags and concerns is that in the year 2017-18, a new sub-head was added to the National Security Council Secretariat called the Cyber Security Research and Development.

Interestingly, that year, the grant allocation to the National Security Council Secretariat shot up from Rs 33 crores in the preceding year to Rs.333 crores in 2017-18, and the chronology here reflects that the Pegasus snooping allegedly began in the same year,” the Congress spokesperson alleged at a press conference.

What explains the huge rise in the allotment of grants to the National Security Council Secretariat with 300 of the 333 crore being spent on Cyber Security Research and Development itself, Khera said.

This trend has continued ever since with Rs.228.72 crores being allocated in 2021-22, he said, adding that allegations of snooping using Pegasus are from 2017.

Referring to the media reports that eight phones of the then CBI director Alok Verma and his family members were put in the list of devices allegedly targeted for snooping using the Pegasus spyware by an unknown Indian agency soon after he was divested of the coveted charge on October 23, 2018, Khera said the expose reveals that prominent names from the corporate world and serving bureaucrats of the time, no less than those in the Central Bureau of Investigation (CBI) were also snooped upon.

“Along with Mr Alok Verma, two other senior CBI Officers Mr. Rakesh Asthana and his colleague Mr A K Sharma’s phones were also snooped upon. This also seems to show a direct connection with the raging controversy on the Rafale deal because in October, Alok Verma, the then CBI Director had met with Prashant Bhushan and Arun Shourie who had personally handed over the complaint pertaining to Rafale,” he said.

Posing questions to the government, Khera asked whether the government of India or any of its agencies buy Pegasus software or not.

Pointing out that the government has not yet directly denied using Pegasus, Khera said if the government did not buy this software, which was the other government, from which country snooping on Indian citizens.

Was this budgetary grant increased for the National Security Council Secretariat to purchase Pegasus, he asked.

West Bengal CM Mamata Banerjee was unanimously chosen chairperson of the Trinamool Parliamentary Party, possibly to build her national profile before her high voltage Delhi trip. A seven-term MP, she is not a member of Parliament at present.

“We consider Sen’s suspension as malicious and arbitrary. We condemn it. The order was without any justification and has no provision in law,” Trinamool chief whip Sukhendu Shekhar Ray said.