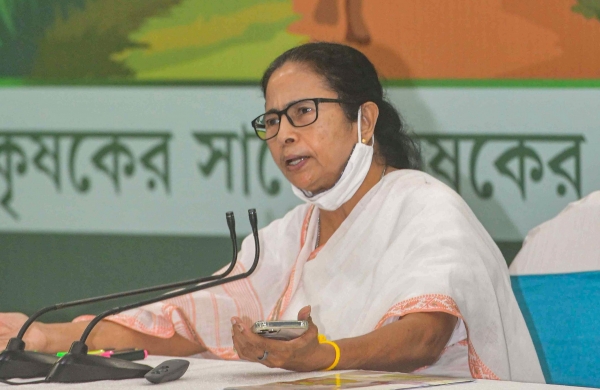 She also asked the Supreme Court to take cognizance of snooping scandal that purportedly targeted politicians, activists, journalists and even judges using the Pegasus spyware, and asked Opposition parties to come together to defeat the BJP in the 2024 Lok Sabha elections.

“BJP wants to convert a democratic country into a surveillance state rather than a welfare state,” she said addressing the Martyrs’ Day rally in Kolkata online.

The TMC observes Martyrs’ Day on July 21 every year to commemorate the killing of 13 people in police firing on a rally of Youth Congress workers against the then Left Front government in 1993 when Banerjee was in the Congress.

The TMC supremo also accused the Centre of spending the money collected through tax on fuel and other commodities for spying using a “dangerous software” instead of funding welfare schemes.

Slamming the BJP-led NDA government for its “monumental failure” in handling the second wave of the COVID crisis, the TMC supremo termed the saffron party a “highly loaded virus party” which needs to be defeated at any cost.

Banerjee thanked leaders of the Congress, NCP, SP, Shiv Sena and several other parties for joining her rally virtually from New Delhi.

She said all those opposed to the BJP and its “authoritarian regime” should defeat it.

“BJP has taken the country to darkness, we all have to come forward to take it to new light,” the Bengal leader said.

“Khela Hobe” (will play), she declared, renewing the battle cry she made during the state assembly elections, adding the fight will continue till BJP is ousted from power.