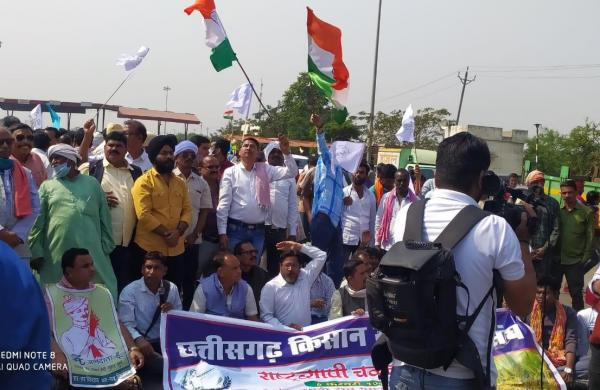 By Express News Service
RAIPUR: A three-hour Chakka jam (road blockade) was held peacefully by the farmers in different districts of Chhattisgarh on Saturday.

The local Congress leaders and workers were seen coming out on the highways to extend the party’s solidarity with the farmers who are protesting against the three farm laws of the Centre.

The farmers blocked various national and state highways across the districts of Raipur, Bilaspur, Raigarh, Rajnandgaon, Mungeli, Janjgir-Champa and other places. Hundreds of vehicles, including buses and trucks, remained stranded on the highways.

The police forces were deployed to maintain law and order.

“Chakka Jam was organised in almost every district of the state in response to the nationwide call by the farmers’ unions and to express our unanimity with the farmers protesting against the controversial agricultural laws”, said Sanket Thakur, convenor of Chhattisgarh Kisan Mazdoor Mahasangh.