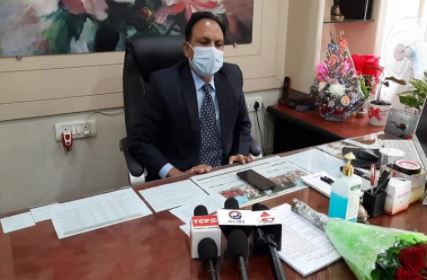 The salaries of the daily salaried officers and employees working in the medical college of the capital are pending for 3 months. Despite giving emergency service at the time of Corona, he has no inquiries. When asked about salary, they get only assurance instead of salary. Kovid-19 Lab was established in April 2020 at Medical College Raipur for prevention and investigation of global pandemic corona virus. 1200 to 1500 samples were being tested daily in the lab. Due to the high corona sample and human resource work, the contract and daily wage earners officers and employees including scientists, lab technicians, lab attendants, vehicle cunning etc. were being served by the college. Officers and employees were offering their continuous services in the lab even on holidays. Despite this, remuneration of any officer and employee has not been provided for 3 months. Officers and employees are facing financial problem due to non-payment of salary. On this subject, he has given information to the Health Minister and Director of Medical Education, Raipur and requested that his remuneration should be given to him as soon as possible. At the same time, the president of the college Vishnu Dutt says that all of them have not received their salary due to no money coming from Disaster Fund. A letter has been written to the head to pass the fund on this subject and his salary will come soon. With this, I have spoken to the Commissioner to clear the fund of Autonomous and will approve it and pay it to all of us by tomorrow.