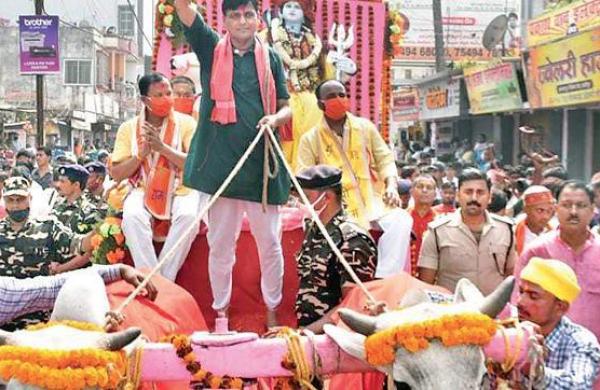 Cops to keep an eye on crime history through appIn a first, the Bihar Police has developed a mobile app ‘Chakra’ to share the crime history of offenders, the names of arrested persons and their conviction details. Just in one click, all information regarding criminals along with their photographs would be available on the phone of police personnel. The state police department will keep a complete record of all criminals through this app and be able to monitor their activities even after the offenders come out from jail on bail. The app will be exclusively accessible to police officials and not the public. At present, the mobile app is undergoing trial with data entry process. Two SIM cards have been sent to each of 38 districts along with 2 android mobile handsets for running this app on trial basis now.

Junior minister rides bullock cart on MahashivratriCarrying on the age-old tradition on Mahashivratri, Union Minister of State for Home Affairs Nityanand Rai rode a bullock cart at his hometown, Hajipur. He started the ride from the famous Pataleshwar temple and concluded at Askhayabat stadium, passing through the city with thousands of devotees in traditional dress.  Before that he performed prayers and rituals on the occasion of Shivratri. Nityanand Rai, even when he was the MLA of Hajipur, used to ride bullock cart during the festival.

Rail services resumes after 87 yearsGeneral Manager of East Central Railway (ECR), Lalit Chandra Trivedi got a chance to conduct the historical inspection on of the restored Supaul-Saraigarh-Nirmali-Jhanjharpur railway line via Kosi Rail Bridge on which the railway movement was stopped after the devastating earthquake in 1934. It was also for the first time in the Indian Railways that the General Manager’s Special train was run entirely by women staff.  All the crew members, including the locopilot and guards, were women. The local people along the railway line also celebrated the occasion.