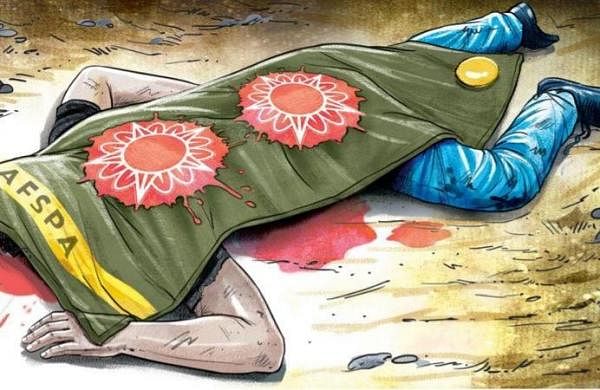 NEW DELHI: The Centre is likely to explore the possibility of partially lifting the Armed Forces Special Powers Act from Nagaland and some other northeastern states.

The move follows a late night meeting on Thursday between Union home minister Amit Shah and the Assam and Nagaland chief ministers. If the AFSPA is lifted even partially from Nagaland, it will be a first in the state’s history.

Sources privy to the meeting said Nagaland Chief Minister Neiphiu Rio, Deputy Chief Minister Y Patton and former CM T R Zeliang were unanimous in their opposition to the AFSPA. But Assam Chief Minister Himanta Biswa Sarma is believed to have taken a different stand for his state.

Shah is believed to have told Rio and the others that if the AFSPA were to be lifted even partially, the modalities would have to be worked out and the state police would have to shoulder more responsibilities in maintaining law and order.

ALSO READ: AFSPA to continue in Assam, to be withdrawn if peace lasts, says CM Himanta

Shah is expected to brief Prime Minister Narendra Modi about the talks before a final call is taken on the matter.

The Centre will have to decide before December 31 when the disturbed areas notification, which enables AFSPA, will expire in Nagaland.

A senior Nagaland police officer said if the AFSPA is withdrawn, among the modalities that can be considered is the setting up of a unified command so that the Army can have a role in the maintenance of law and order.

The government may consider lifting the AFSPA only in rural areas as the Act was needed in urban centres where insurgents groups are engaged in large-scale extortion and kidnapping, he said.

There is also the possibility of continuing the AFSPA only along a 20 km India-Myanmar border stretch.

There has been a clamour to withdraw the AFSPA after the tragic incident in Nagaland’s Mon district in which the Army gunned down 13 civilians in a case of mistaken identity.

The North-east state has seen massive protests against the law that empowers Army and paramilitary personnel to kill, arrest and search premises merely on suspicion and they are protected against any legal prosecution.

On December 20, the Nagaland Assembly passed a resolution demanding that the “government of India repeal the AFSPA from the Northeast and specially from Nagaland so as to strengthen the ongoing efforts to find a peaceful settlement to the Naga political issue.”

At present, the Assam Rifles is majorly responsible for maintaining law and order in the Northeast and it also guards the Indo-Myanmar border with the Army. The Assam Rifles is the only paramilitary force with a dual control structure.

While its administrative control lies the Union ministry of home affairs, its operational control is with the Army.

MHA officials told this newspaper that both the Assam Rifles and the CRPF, which has about 35 battalions in the Northeast, including 18 in Assam and two in Nagaland, have conveyed to the government they are in favour of a status quo on the AFSPA.

“All central police forces were asked to convey their stand on the AFSPA and they have all said they do not want any changes in the deployment and want a status quo,” said a senior official of the home ministry.

A special MHA plane was sent from the national capital to fetch the Assam CM and the Nagaland leaders for the meeting with Shah. Currently, the AFSPA is applicable in Tirap, Changlang and Longding districts and two police stations of Namsai district in Arunachal Pradesh, and the entire Assam, Nagaland and Manipur, except Imphal municipal areas.

As for the central police forces, they do not want any changes in deployment in the Northeast. They want a status quo, a senior official of the Union home ministry said.