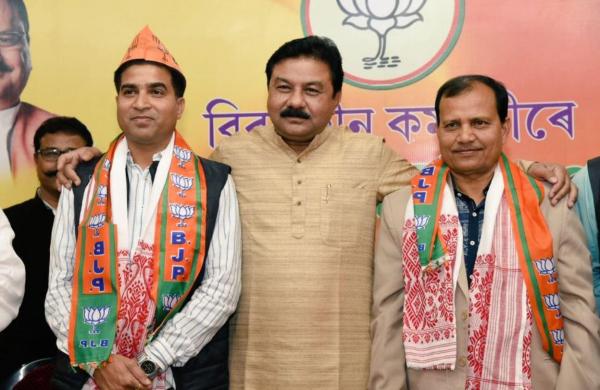 By PTI
GUWAHATI: Former Asam Sahitya Sabha Parishad president Parmananda Rajbongshi quit the AGP and crossed over to the BJP on Saturday at the saffron party’s state headquarters here.

Along with him, Rupesh Goala, the general secretary of a tea workers association in the state, also joined the saffron camp.

BJP state unit chief Ranjeet Kumar Dass, after welcoming the two leaders to the fold ahead of Assam assembly elections, said they will further strengthen the party and help realise its goals.

Dass also said that the party has decided to field Rajbongshi from Sipahjar constituency.

“The BJP does not fight elections to come to power but to build a strong society,” he added.

Rajbongshi said Prime Minister Narendra Modi’s ideals and his efforts to bring peace and development to the northeast inspired him to join the BJP.

Speaking on the occasion, Goala, the leader of Assam Chah Mazdoor Sangha, said he was happy to be a part of the BJP and its development initiatives — launched by the prime minister and being implemented by Chief Minister Sarbananda Sonowal and state finance minister Himanta Biswa Sarma.

BJP MPs Bhubaneswar Kalita, Pallab Lochan Das and other senior members were present at the parttys state headquarters on the occasion.